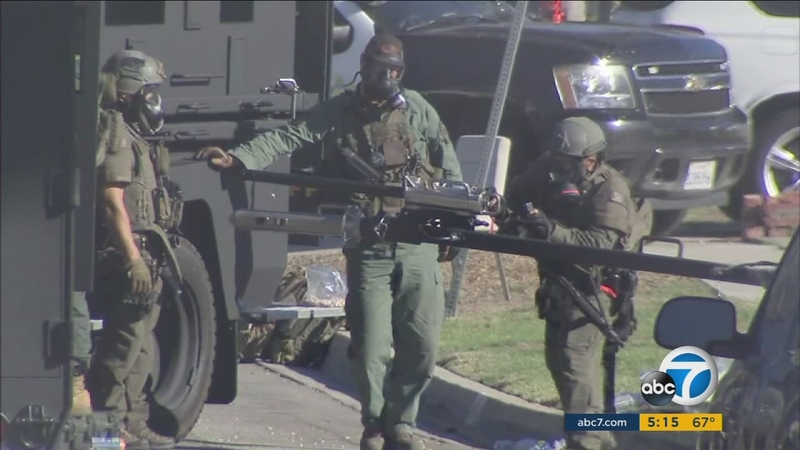 Deputies responded to the 8800 block of Dalewood Avenue at about noon on Sunday after they said a 31-year-old man pointed a rifle at a neighbor.

SWAT members with the sheriff's department arrived at the scene as the man barricaded himself inside a home with his mother, holding her hostage.

At one point, deputies said the suspect fired in the direction of law enforcement, hitting some of their armored equipment.

Authorities said the suspect even cut the line to a phone sent to him in an effort to negotiate with him.

After the mother escaped and was able to tell the sheriff's department her son was suffering from mental illness, SWAT personnel backed off and a crisis mental health team moved in.

"There needs to be more mental health awareness in the community," Sgt. Anna Briz with the sheriff's department said.

Briz said she and her team of highly-trained mental health negotiators learned the best way to get the suspect to surrender was through his grandmother.

"I was able to send one of my teams to (his) grandmother's home that was in Santa Fe Springs," Briz explained.

Just a few miles from the standoff, experts coached the suspect's grandmother during a phone conversation with the armed man.

"We were able to coach grandmother through what to say and he listened to her and he was able to come out without anyone hurt," Briz said.

After more than 26 hours, the man was safely taken into custody.

The sheriff's department said it wanted more standoffs and barricade situations to end peacefully, especially with suspects who suffer from mental illness.

"Personally I have yet to meet a deputy sheriff who wants to hurt somebody," Lt. Don Gannon with the sheriff's department said. "We're trying to actually train our people on how they can prevent getting involved in these entanglements with people when it can be avoided."