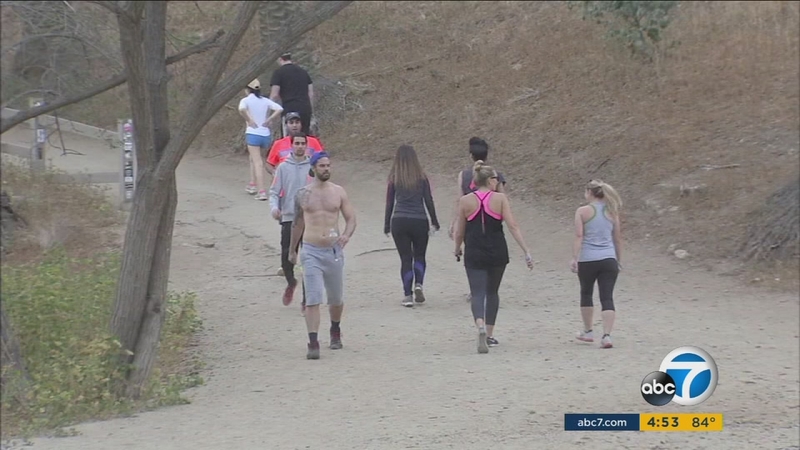 HOLLYWOOD HILLS, LOS ANGELES (KABC) -- A group of residents living near Runyon Canyon are suing the city of Los Angeles in an attempt to stop the construction of a basketball court at the beloved park.

The recreation area, which is known for its hiking trails and dog park, will be closed through the end of July while crews repair a water pipe, but the construction of a basketball court has left neighbors fuming.

"People yelling, 'Throw me the ball,' or the constant dribbling of the basketball, is going to echo and resonate through the entire canyon," said Bob Mansell, who wants construction of the basketball court halted.

Attorney Rob Glushon said the city did not follow the correct procedures in regards to its construction.

"If the city wants to change the master plan to allow recreational facilities like a sports court, there's a process to follow. They didn't follow that here," he said.

Residents say that when the basketball court is finished, it will sport the Pink Dolphin logo. The Los Angeles-based streetwear company is paying more than $250,000 to fund the project.

"If TMZ wanted to put a logo on the Hollywood sign, how much would they pay for that?" Mansell said. "How far are we going to go with this?"

Pink Dolphin executives say they just don't understand how they've become the bad guys because the plans to build a basketball court have been in the works for more than two years.

"They sent out 6,000 notices to all these homeowners. So for people to be coming out now, saying this is some sort of secret project, it's just a little shocking," Pink Dolphin co-owner Cena Barhaghi said.

"Almost 2 million people walk this park every year. So for a small group of people to be upset, if people put it in perspective and look at the overall opinion, I think they'll see that everyone's really happy," Khaila said.

"They went behind people's backs to get something done in a sneaky way," homeowner Margot Black said.