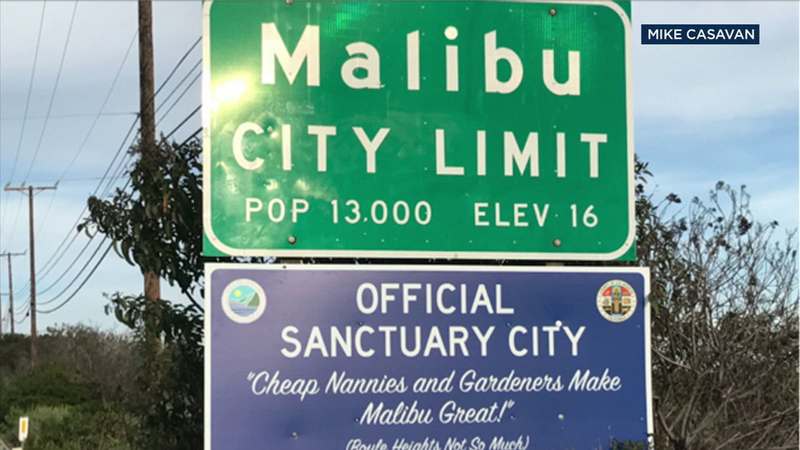 MALIBU, Calif. (KABC) -- An official-looking sign pranking the city of Malibu popped up on Tuesday not long after the beach municipality proclaimed itself as a sanctuary city.

Malibu is calling it an unfortunate prank. It's a sign that was posted on Pacific Coast Highway, mocking the city's decision. The sign read: "Official Sanctuary City: Cheap Nannies and Gardeners Make Malibu Great! (Boyle Heights, Not So Much)."

The city said the sign was taken down as soon as they were alerted by a state park employee Tuesday night.

A social media website was claiming responsibility. It said its rogue work is part of a Republican art movement intended to show that the Los Angeles scene does not belong to the left wing.

The city manager told Eyewitness News on Wednesday that the Los Angeles County Sheriff's Department was investigating, trying to determine who posted the sign and whether any crime was committed.

"It was like, 'Wait a minute, that couldn't have been real.' So we drove and turned around, and we took a picture of it. It looked official and so when I saw that, I thought, 'Wow, Malibu is way out of touch,'" said Mike Casavan, of Yucaipa.

The Malibu City Council recently voted 3-2 in favor of the sanctuary designation. Prevailing council members argued that it was not a measure to protect servants to the wealthy, but rather that it was a safety issue for an estimated 80 children who are either undocumented or whose parents are undocumented.
Related topics:
malibulos angeles countysanctuary citiesrepublicansimmigration reformprankpoliticsimmigration
Copyright © 2021 KABC-TV. All Rights Reserved.
RELATED
Council votes to declare Malibu a sanctuary city
TOP STORIES
Newsom picks 10 winners of $15M to celebrate reopening
California reopens today - what changes?
SoCal forecast: Excessive heat warning to take effect
Ex-CA Rep. Rohrabacher confirms he was at Capitol riot
More than 30 pelicans mutilated on OC coast
Newsom says vaccinated CA workers won't have to wear masks after June 17
UC will require students, faculty and staff to be vaccinated
Show More
More evidence suggests COVID was in US by Christmas 2019
Video shows brazen theft at San Francisco Walgreens store
Actress Lisa Banes dies after being hit by scooter
MacKenzie Scott announces she's donating $2.7 billion
Suspect arrested in hit-run death of Long Beach security guard
More TOP STORIES News