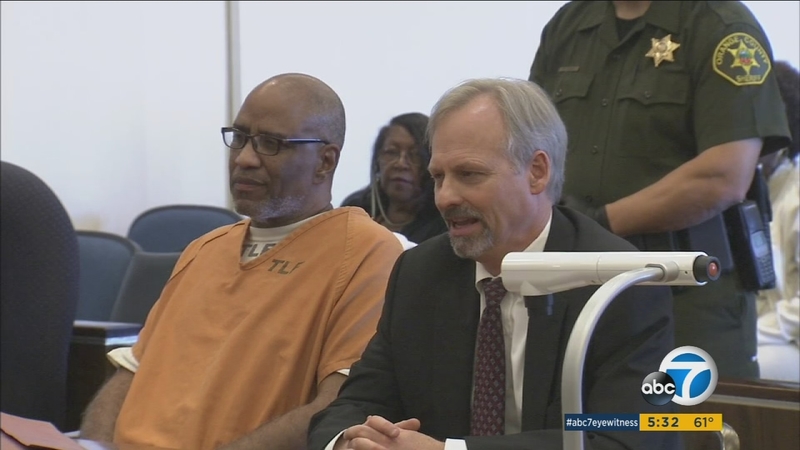 SANTA ANA, Calif. (KABC) -- A convicted murderer on death row for more than 30 years says he has newfound hope as he pushes for a new trial.

"I am innocent. I didn't commit this crime," Clair said, speaking from inside the Theo Lacy jail in Orange. "That's all I wanted: My day in court"

Clair is off death row. In 2015, the 9th Circuit Court of Appeals found the death penalty could not be fairly imposed on him. His defense attorney Julian Bailey admitted his penalty phase trial work in 1987 was incompetent.

Last week, Clair filed a motion for a new trial, alleging prosecutors withheld scientific test results that could clear him.

In the past, prosecutors said, they have provided the defense with everything they're entitled to.

But the victim's daughter, Kristy Rodgers, now 38, says: "He claims he's innocent and I don't believe that. ... My mother's murder was brutal."

Kristy Rodgers, then just a little girl, was among five kids in the Santa Ana home during the murder.

She lived there with her mom's friend Peggy Hessling-Wise, Peggy's boyfriend at the time, Kai Henrickson, and her kids.

"I pushed open the door and there was like red stuff... it was blood splatter," said Hessling-Wise. "I started to get up on the bed...and she was right there."

Rodgers was bound, gagged, beaten, stabbed and strangled. Hessling-Wise's son, Jarrod, just 5 at the time, was the only alleged witness.

Jarrod, now 37, originally told police the killer was white. He told Eyewitness News he saw a white man with Rodgers the night of the murder, but that man left and a black man entered the home and killed Rodgers. However, his descriptions changed numerous times over the years and he was not called to testify at trial.

Court documents indicate no fingerprints, no blood could tie Clair to the scene.

"No DNA links Kenneth to the case," said C.J. Ford, a private investigator who's been trying to clear Clair's name for more than a decade.

Prosecutors confirm DNA taken from Linda's body, tested in 2007, did not match Clair.

But it did share the same genetic marker as a Fresno-area man tested in 2010.

The defense continues to request his name, even though a judge in 2011 denied the release of his identity.

Prosecutors say at the time of the murder, that man was 11 years old and living outside the United States.

Prosecutors admit that none of the man's older relatives were tested or investigated.

"They were found to have no connections to Orange County. And because it's a single genetic marker it's a very common genetic marker," Wagner said.

Ford said: "Give me all the discovery, which should give me the DNA results. The defense can investigate further because Kenneth Clair's DNA is not anywhere on the crime scene."

Clair claims he was targeted from the start. Then a 25-year-old transient, he admits he was staying at a vacant house next to the victim's place. He also admits burglarizing the home the week before, but insists he didn't kill Rodgers.

"The most damning physical evidence that links Clair to the crime scene is his possession of jewelry that was stolen," said Wagner.

That jewelry includes a unique silver turquoise necklace belonging to Hessling-Wise. She told police it was taken the night of the murder.

She references it while secretly recording Clair for Santa Ana police in 1985.

Flores: "What about the(expletive) jewelry?"

Clair: "I throwed that (expletive) away."

Flores also told police Clair had blood on his hand, possibly from a scratch, which she also asked him about during the secret recording.

Clair claims he was being sarcastic.

"I had just gotten out of jail, it was cold, I'm walking and she's constantly nagging me," Clair told Eyewitness News.

While he denies committing the murder on tape, he makes several statements prosecutors argue are incriminating.

Clair: "Will you leave that alone, please. You don't have to rub that in my (expletive) soul."

Clair explained to Eyewitness News he was tired of Flores asking him the same questions over and over.

"I'm from New Orleans, Louisiana. That's a common thing we say when we're being hounded or like you're just getting on my nerves," he said.

Said Wagner: "It's the best evidence. It's right out of the horse's mouth."

Clair claims Flores was not with him that night.

In 2005 Flores recanted her testimony and signed a declaration, acknowledging shortly before the murder she suffered a near-fatal head injury.

Her best friend at the time, Barbara Brown, was with her when she suffered the accident, and said Flores could not even recognize her, let alone describe anything such as jewelry in detail.

"She had a bicycle accident, her mentality was a 2 year old," said Brown, who was never called to testify at trial.

In a May 30, 2005 taped interview with investigator C.J. Ford, Flores said: "If I couldn't remember my own family I probably messed up on my timeline quite a bit."

In a 2001 declaration, Flores stated: "I had an outstanding bench warrant for my arrest when I offered to try to tape record a statement from Kenny...The detectives took care of my warrant in exchange for me wearing the tape recorder."

The defense alleges if she was accurate in her declaration this benefit was never disclosed to the jury.

Santa Ana police told Eyewitness News Flores never had a bench warrant and investigators did nothing to assist Flores in clearing up any legal matters she may have had.

Prosecutors also said they are not aware of any benefits Flores received.

Prosecutors say her secret recording of Clair helped prove his guilt. They won't pursue renewal of the death penalty given the age of the case, but continue to maintain he's guilty.

"My mom was very sweet and loving," recalled Kristy Rodgers. "If he (Clair) would've just taken 5 minutes or 1 minute and thought about what he was about to do, turned around and walked away, none of us would be here right now."