KABC
By ABC7.com staff
SANTA ANA, Calif. (KABC) -- A man was arrested after police say he swung from trees and tried to enter a monkey exhibit at the Santa Ana Zoo, all while claiming to be "Tarzan."

Kent Yamaguchi, the zoo's director, was the one who made the bizarre 911 call on Tuesday.

"We have a gentleman who appears to be under the influence of something and is climbing in our trees and jumping into animal exhibits," Yamaguchi is heard in the 911 call recording.

Yamaguchi said the man, later identified by police as 37-year-old John William Rodenborn, was shirtless and climbing trees near the zoo's aviary.

"He climbed up into the tree and then proclaimed himself that he was 'Tarzan,' and that he was here just to have a good time," Yamaguchi said.

After Rodenborn ignored Yamaguchi's request to get down, Rodenborn did a lap and then found a new perch atop the waterfall in the black howler monkey exhibit.

"He was covered with mud. He was in the trees saying, 'I am Tarzan,' and we knew at that point, something was probably wrong," Yamaguchi said.

Yamaguchi said the monkeys never saw the man. He doesn't believe they were in any danger. He called 911 and his staff kept visitors out of the area as a precaution.

"For clearing people out, we did the same thing for an agitated person as we would for an escaped agitated monkey," Yamaguchi said.

After a short chase, officers arrested Rodenborn. Employees snapped photos of the man being taken into custody. 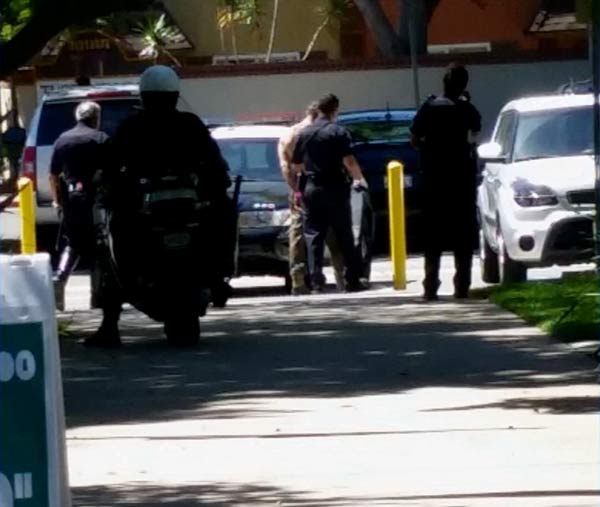 Santa Ana Zoo employees snapped this photo of a suspect being taken into custody after he reportedly swung from trees and tried to enter animal exhibits on Tuesday, Aug. 4, 2015.