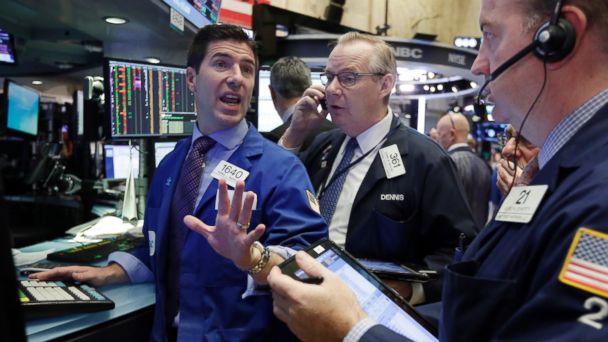 With national polls showing a tight presidential race, U.S. markets are suffering from a serious case of the jitters.

The Dow Jones Industrial Average has dropped a few hundred points over the past few days while the S&P 500 finished at its lowest level in three months on Wednesday.

But several financial experts believe the markets are still expecting Democratic presidential nominee Hillary Clinton to eek out a win.

According to the analysts interviewed by ABC News, the markets have "priced-in" a Clinton victory -- meaning that investors are making calls based on the assumption Clinton will be victorious next Tuesday.

But, they said, the markets are less confident in a Clinton victory than they were in previous weeks.

According to latest ABC News polls, the two presidential candidates are locked in a dead heat nationally.

Moody's chief economist Mark Zandi agreed, saying: "I think financial markets were fully pricing in a Clinton victory a week ago. Since last Friday, markets have turned weaker as the odds of a Clinton victory have declined."

And some say that the announcement last week about a new FBI investigation into emails potentially linked to the Clinton probe may be having an effect on voters.

"We continue to think that she has a pretty good lead electorally, but we're starting to think that Friday's announcement might tick her unfavorables a little bit higher and might cost her in the electoral vote," said Paul Christopher, the head of global market strategy at the Wells Fargo Investment Institute.

Irish bookmaker Paddy Power has also called the race for Clinton, paying out $1 million in bets.

Rob Haworth, senior investment strategist at U.S. Bank, said "the place where you really see it is at the industry level."

"We've seen [construction] companies doing very well heading into the election," which he said was the result of investors' assumption that a Clinton presidency would see new spending on infrastructure.

But as the experts said, markets have become rattled in recent days.

"They're starting to anticipate a risk of a Trump win," Haworth said. "The polls have been coming in and the race is narrowing and that's helped pressure the market."

Zandi explained that markets do not respond well to unpredictability.

"Investors crave certainty, and since Clinton represents the status quo, they are most comfortable with her as president," he said, noting that the uncertainty "is evident in the slump in stock prices, wider credit spreads in the bond market, a weaker Mexican peso, and higher gold prices."

Indeed, the S&P 500 fell for the seventh day in a row on Wednesday.

The last three times it declined that many days in row occurred twice during the 2011 European debt crisis and once during the 2008 financial crisis, according to Bloomberg News.

The exchange rate between the U.S. dollar and the Mexican peso also sheds some light on the election.

Over the course of the campaign, the peso has weakened when events and developments were in Donald Trump's favor. And it usually strengthened when the opposite was true.

"I think it has a lot to do about walls along the border and how tough he's going to be on negotiating trade deals and perhaps renegotiating NAFTA," Christopher said.

If you looked at a chart of the exchange between the two currencies, it's possible to see major campaign developments.

For instance, the value of the peso plunged in the days after Clinton fell ill while attending a Sept. 11 anniversary memorial service. Its value spiked after the Sept. 26 presidential debate and in the days after a 2005 tape surfaced of Trump making lewd remarks about women while filming an interview with "Access Hollywood."

This week the peso has devalued quite a bit against the greenback.

"The peso's call is still a Clinton victory, but it's much less certain," said Colas.

Colas also pointed to the price of gold as another sign that the markets are on edge over the election.

"Gold is a very unique asset," he explained. "It tends to go up when one of two things happen. Either you have real political uncertainty or real financial uncertainty. When you see big moves in gold -- like you've seen in the past couple of days -- what it's telling you is that there is genuine fear and uncertainty and in this case not about the financial situation of the world, but the political situation of the world."

The price of gold has edged up in recent days to about $1,300 per ounce -- about where it was at the beginning of October.

What is it about about the prospect of a Trump presidency that has markets so shaken?

Having a sense of that allows for more certain bets in the markets.

"I think markets don't like uncertainty and [Clinton] represents more of a known quantity," explained Wells Fargo's Christopher. "Her policies are more elaborately laid out than his. His policies would have to be found out as we move along."

Looking beyond Trump and his policy platform, major changes in leadership also inject uncertainty into the markets.

"What we see in history is typically the market will rally when the incumbent party is leading and wins," said Haworth. "There's nothing more uncertain than a change in leadership, so if the non-incumbent party wins we'll typically see the market sell off."

Just as the prospect of new neighbors moving in next door can bring anxiety to the neighborhood, Colas noted, a change in White House leadership can send a chill down investors' spines.