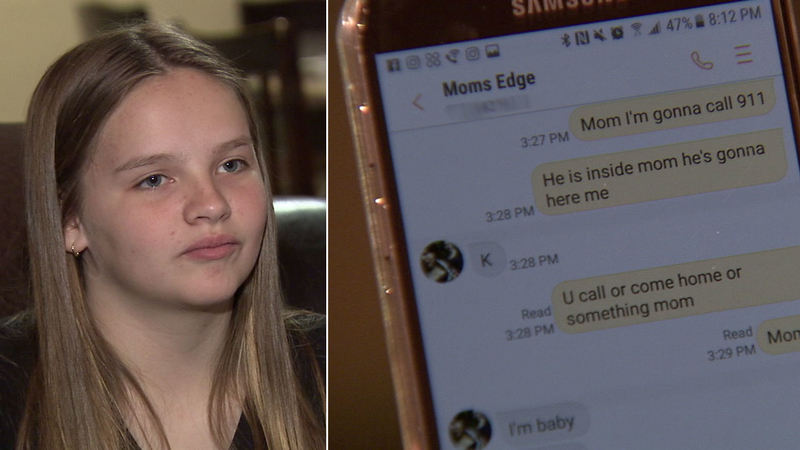 MONTCLAIR, Calif. (KABC) -- A Montclair teenager recalled the terrifying moments she found herself and her little niece in the middle of a home invasion.

Savannah Jones, 14, sent her mother frantic text messages after she realized someone was breaking into her home.

She was babysitting her 4-year-old niece Zoyee Tuesday afternoon when she heard someone knocking on the door. She looked through the peephole and knew it was someone who wasn't supposed to be there.

Savannah said she motioned her niece over to the living room from the kitchen and that's when the door knob started jiggling. She grabbed Zoyee and ran to her mother's bathroom.

"The last bang, I knew that he was in the house," she said.

Savannah said she wanted to call the police, but didn't want the intruder to hear her, so she kept texting her mother. As she was doing this, the intruder ransacked a room just feet away from them, dumping items from the closet and drawers onto the bed.

"I wanted to yell back. I wanted to let him know that I was in here, but I wasn't sure that the guy had left, so I didn't say anything," she said.

The intruder bolder, and moments later, police arrived. They were able to coax Savannah and Zoyee out of the bathroom. They were shocked to see the damage left behind.

Savannah said she is happy she found the strength to keep herself and Zoyee safe. But she can't help thinking it could have been worse.

"When I do think about it, I do get kind of emotional, I guess, thinking about what could have happened and thinking that he was in the same room with us," she said.

In the end, the intruder fled without taking anything. Anyone with more information is urged to call the police.
Related topics:
montclairsan bernardino countyhome invasion911 callchildrenteenagercellphonetext messages
Copyright © 2021 KABC-TV. All Rights Reserved.
More Videos
From CNN Newsource affiliates
TOP STORIES