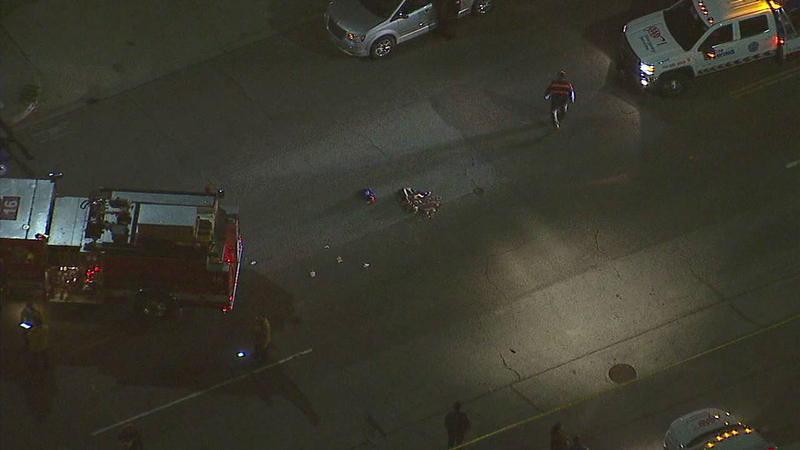 EL SERENO, LOS ANGELES (KABC) -- A mother carrying her 2-year-old son at an El Sereno intersection was killed when she was struck by two cars, one of which fled the scene.

The woman, who was identified by the coroner's office as 31-year-old Alicia Bello, was trying to cross Alhambra Avenue just east of Endicott Street when she was struck by a car traveling westbound on Alhambra Avenue around 6:45 p.m. Wednesday, the LAPD said.

Bello was struck on her left side while carrying her son with her right arm. Police said the child, apparently thrown to safety by his mother, was launched approximately 50 feet and landed near the middle of the road.

Bello was thrown into the eastbound lanes of Alhambra Avenue, where she was struck a second time by a 2004 Nissan Frontier.

The driver of the Nissan remained at the scene, was questioned and released. The driver of the first car fled without rendering aid. That car was described as possibly a Honda SUV with damage to the left side.

Bello was pronounced dead at the scene. Her child suffered numerous lacerations to his head and was transported to a local hospital for observation, police said. LAPD Capt. Alfonso Lopez described the child as being in "good condition."

"Nothing like metal on metal, just like a thump," said El Sereno resident Daniel Moran. "Just to see it happen in front of you and think, oh, damn, she's not getting up or she's not moving. It's like ... someone's gone."

Another resident of the neighborhood, Angela Vizcaya, recalled on Thursday: "When I heard aobut it, it was just tragic. It was very, very sad to hear that a young mother lost her life."

A reward of up to $50,000 is available to community members who provide information leading to the hit-and-run driver's identity, arrest and conviction, police said.