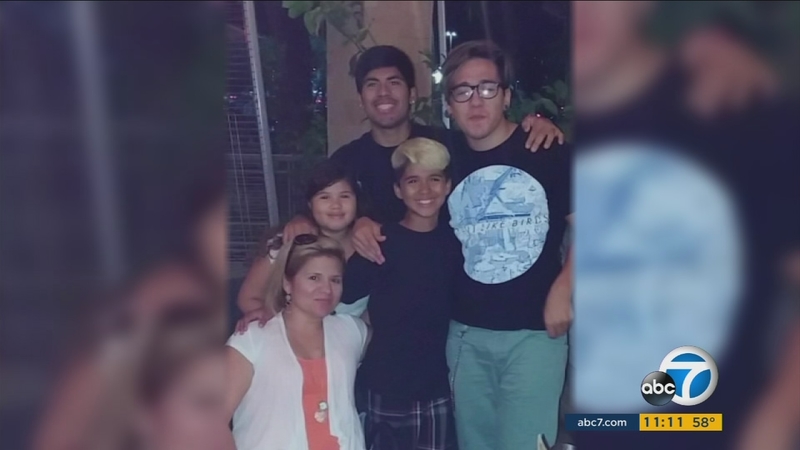 ANAHEIM, Calif. (KABC) -- Ana Corrales begins to cry as she talks about her son.

He would have turned 23 on Wednesday, but instead of celebrating, she planned to visit his grave.

Luis Corrales, or Danny as she called him, was her first born. Speaking exclusively with ABC7, Ana Corrales said from the time Luis Corrales was a little boy he loved music.

By the time he reached his teens, he knew what he wanted to do.

"He wanted to be a singer, a rapper, that was his dream," recalled the single mom of four, a resident of Huntington Beach.

He paid for studio time by working as a furniture mover. At just 22, she says he had written 70 songs.

She had no idea the song DTG ("Danny the Greaser") "Don't Know Me" would be among his last recordings.

Luis Corrales is seen in the video dancing and singing in a dark industrial area of Anaheim.

It would be the area where he would lose his life just weeks after the video was published on YouTube in September.

But she would learn from the video that art was imitating her son's life.

"I noticed the balloons in one of his videos, but little did I know what those things were for," she said.

In the video, young people are seen holding and inhaling from colorful balloons.

But in real life, Luis Corrales was among about 100 people who attended what's called a "noz" party or nitrous oxide party at 2:45 a.m. on Sept. 20, according to Anaheim Police Sgt. Jeff Mundy.

"They sell the noz inside balloons and people inhale the balloons," said Mundy.

A quick high that can be potentially deadly, as excessive inhaling can cause brain damage. However, it wasn't the gas, but someone with a gun who shot and killed Luis Corrales.

"No one deserves to die that way," said Ana Corrales.

The motive is still unclear for his killing.

Photos of the scene in the 1500 block of West Embassy Street obtained by ABC 7 show colorful balloons littering the street and dozens of evidence markers.

Police said all sorts, from high school students to gang members, are drawn to noz parties through social media.

"Having that large group of people together, many of whom don't know each other, leads to conflicts," Mundy said.

It's not an isolated incident. Gustavo Lugo, 20, was shot and killed at a house party in the 9000 block of West Houston Avenue in Anaheim back in April of 2011.

Police said Lugo was murdered after an argument over a noz tank.

Detectives said it costs about $100 to fill a noz tank and the person supplying at the party could make up to $400 a tank.

According to police, neither Lugo nor Luis Corrales were in a gang. Both cases remain unsolved.

Officers say witnesses may fear talking because possession of noz with the intention of inhaling or selling is a misdemeanor.

However, homicide detectives said they're more concerned about finding the killer or killers.

Mundy said detectives have looked at surveillance video in the area and interviewed more than 50 witnesses, but so far have no suspects.

"He was the type of friend who would put other people first before himself," said Christian Gill, who met Luis Corrales a year ago and became close friends through music.

Gill said he went to a few noz parties with Luis Corrales in the past, but didn't return.

"I didn't really know anyone...and didn't feel comfortable," said Gill. "The best thing I could say is just know who you are with."

Luis Corrales' mother prays someone comes forward and urges other parents to watch their children closely.

"Just to be aware of what your kids are doing," said Ana Corrales. "No parent needs to go through this."

If you have any information about Luis Corrales' death, you can provide it anonymously by calling OC Crime Stoppers at 1-855-847-6227.