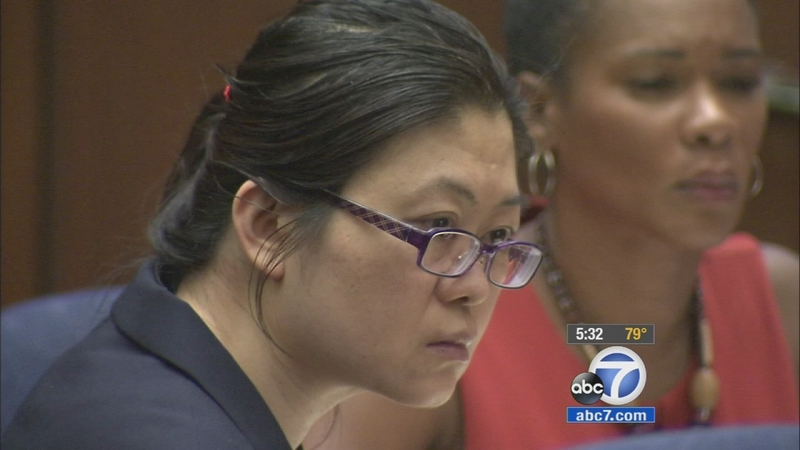 LOS ANGELES (KABC) -- Opening statements were underway Monday in the high-profile murder trial of Dr. Lisa Tseng, who is accused of second-degree murder in the overdose death of three male patients.

Her defense attorney portrayed her to the jury as a nerdy student at Arcadia High School who was devoted to her studies and her newly immigrated family from Taiwan.

Then it was on to prestigious schools for her medical training: UC Berkeley, Michigan State and an internship at USC's Keck School of Medicine.

Hsiu-Ying "Lisa" Tseng, 45, of Rowland Heights, is accused of second-degree murder in the deaths of three patients by prescribing narcotic pain killers and addictive medications.

The prosecutor says Tseng ignored obvious warning signs. The coroner had earlier alerted her that three other patients she had treated died of suspected overdoses.

"The defendant repeatedly had patients overdose and die. The defendant was repeatedly notified by law enforcement that her patients were dying on her. The evidence will also show that during this period of time, the defendant's practice of prescribing did not change at all," Deputy District Attorney John Niederman said.

Murder charges against doctors for the death of patients are rare because of the difficulty in proving causation. In this case, the prosecution does not accuse Tseng of intentionally harming the victims. Instead, it claims implied malice, which means that Tseng's pattern of prescribing failed to show caution.

Niederman cited a list of red flags that were reported by pharmacists who noted her high-patient load and potent drugs she was prescribing from her Rowland Heights clinic.

The patients were consistently 18 to 26 years old, they asked for brand name drugs sometimes costing hundreds of dollars and they often paid in cash. When the pharmacists called Tseng, she gave them vague reasons for prescribing the drugs, according to the district attorney.

The prosecution further alleges that Tseng failed to conduct physical exams, order X-rays or keep records to show why she prescribed specific drugs.

The trial begins five years after the death of Rovero. His mother organized the National Coalition for Prescription Drug Abuse that warns people about a surge in overdose deaths caused by powerful medications.

"They are dangerous. They kill people and if you aren't careful it can happen to you very easily. It didn't take much for Joey to die," April Rovero said outside the courthouse on Monday.

The defense argues that there were other factors involved in the deaths. That some patients had obtained medications from other doctors, ignored the dosage warnings and mixed the drugs with alcohol.

The prosecution says more testing would have revealed whether the patient was abusing drugs.

The complex case is expected to be lengthy, lasting anywhere from two to three months. If she is convicted on all counts, she faces 45 years to life in prison.
Related topics:
los angeleslos angeles countytrialcourtpatient deathdoctor arrestedcourt caseprescription drugsdoctors
Copyright © 2021 KABC-TV. All Rights Reserved.
More Videos
From CNN Newsource affiliates
TOP STORIES