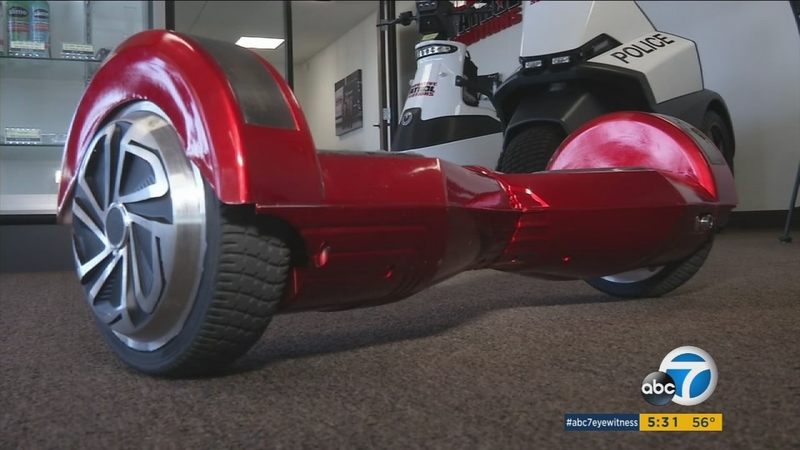 ANAHEIM, Calif. (KABC) -- Popular hoverboards are at the center of a new California law effective in 2016 that requires a riding age, head protection and speed limit rules.

It's one of the hottest gifts this holiday season and the star of countless viral videos. The hoverboard is responsible for thousands of falls all caught on camera.

Even celebrities were getting involved. Mike Tyson posted a video to his Instagram and Twitter of him wiping out on his new toy.

"For any type of a vehicle like this, you're going to need training because if you haven't been on one, it's just not going to be natural to you," said Carole Eatough of Segway in Orange County.

The new law, effective Jan. 1, 2016, mandates riders must be 16 years old to ride in public. They must also wear a helmet and can only ride on streets where the speed limit is under 35 mph.

Anyone who violates the new rules or rides under the influence will pay a $250 fine.

"With any kind of personal transport, you've got to have laws in due effect for the safety of everyone involved," added Eatough.

Not everyone, including John Erikson of Shredderz, however, agreed.

The company sells hoverboards out of kiosks, and Erikson said safety should come first but believes an age restriction is too much.

"It is a little intense, you know, that they would do that," he added. "Why not on bicycles? Why not on skateboards?"

Erikson said the most important thing is for people to learn how to ride and operate the hoverboards the right way.

"Once you get to know it, it becomes second nature to you, and if you're a pretty common sense, smart person, you shouldn't have any problems," he said.