No arrests made during massive Women's March in downtown Los Angeles Footage from AIR7 HD shows a massive crowd of people in downtown Los Angeles for the Women's March L.A. on Saturday, Jan. 21, 2017. (KABC)

LOS ANGELES (KABC) -- The Women's March in Los Angeles brought hundreds of thousands of people to the streets of downtown and authorities said no arrests were made during the peaceful protest.

The demonstration on Saturday was the largest the city of Los Angeles had in nearly 10 years. It was also held as a sister march to the Women's March on Washington at the nation's capitol.

Organizers for the event estimated the crowd to be around 750,000, while Los Angeles police and fire officials said attendance was "well over 100,000." Police said the entire event was peaceful and that no one was arrested.


The march in L.A. was so large that Metro stations were delayed or jammed because of how many people were trying to attend.

Some travelers on the Westside were waiting hours to buy TAP cards and board the trains as Metro officials said they were doing all they could to accommodate passengers.

The event was said to be non-partisan and aimed to protect the rights of women and human rights overall.
Copyright © 2021 KABC-TV. All Rights Reserved.
RELATED 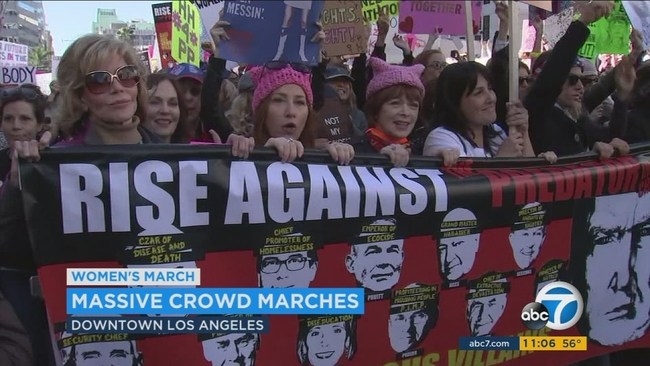