The fire broke out near the northbound lanes of the 15 Freeway at about 2:30 p.m. As of 8:50 p.m., the fire had charred 3,500 acres and was five percent contained, according to the U.S. Forest Service.

Fanned by hot desert winds, the fire spread across the 15 Freeway and burned several vehicles that were trapped in standstill traffic. Twenty vehicles were destroyed and 10 others were damaged, San Bernardino County Fire officials said. 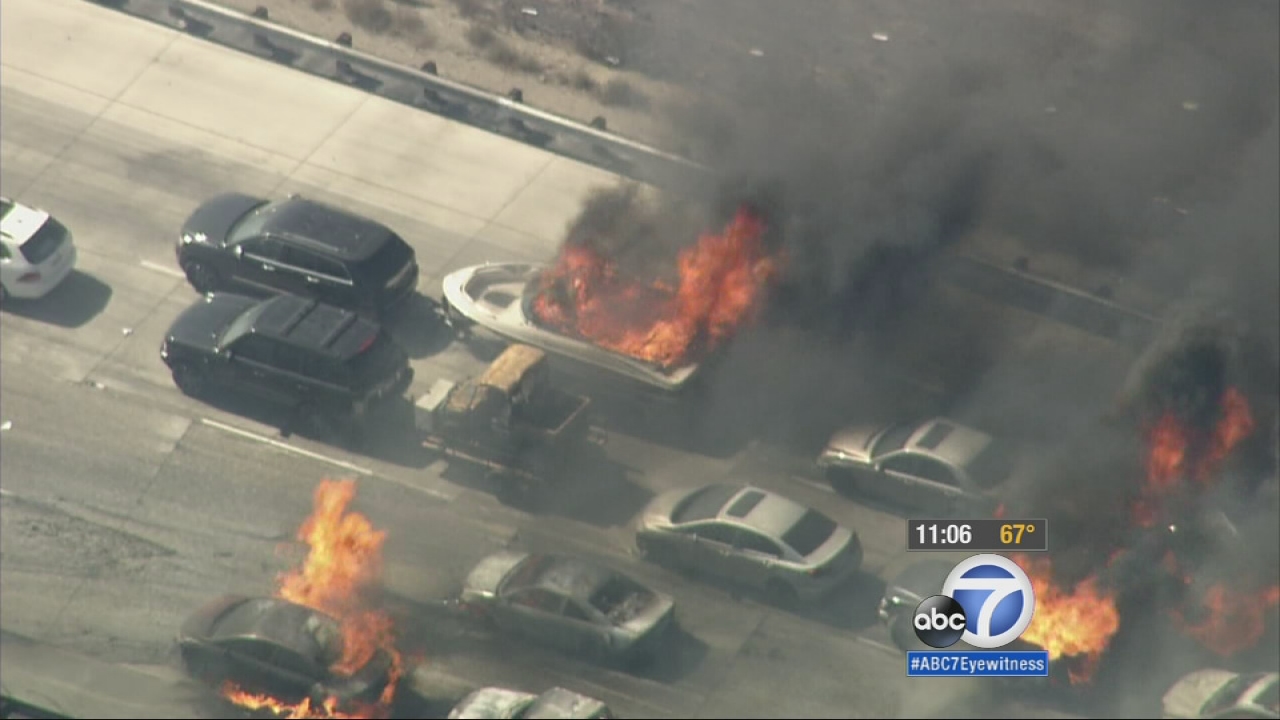 VIDEO: North Fire sweeps across 15 Freeway, burns cars
Several burnt-out cars sat on the 15 Freeway in the Cajon Pass as flames from the fast-moving North Fire shot up from them Friday afternoon.

California Highway Patrol spokesman Steve Carapia said 50 to 75 vehicles were left abandoned on the freeway, making it difficult for emergency responders. A car-carrying tractor-trailer and a boat were among the losses left smoldering on the highway.

Hundreds of other motorists turned onto side roads to get away from the flames.

VIDEO: Flames engulf big rig on 15 Freeway as North Fire spreads
A big rig truck was among several vehicles that caught on fire Friday, as a brush fire raged to more than 2,000 acres along the 15 Freeway in the Cajon Pass.

The fire reached Sage Street in the rural community of Baldy Mesa, prompting mandatory evacuations east of Sheep Creek Road, north of State Route 138, west of the 15 Freeway and Highway 395, and south of Phelan Road.

Four structures were destroyed and at least 300 homes were threatened in the area. There were 22 engines, six air tankers, three helicopters, a bulldozer and 1,000 firefighters battling the North Fire.

An evacuation center has been set up at Serrano High School at 9292 Sheep Creek Road in Phelan. An animal shelter was opened at San Bernardino County Fairgrounds at 14800 7th Street in Victorville.

Five drones temporarily halted air tankers that were fighting the North Fire. Officials grounded the firefighting planes for 15 minutes out of fear that the drone would collide with the aircrafts. 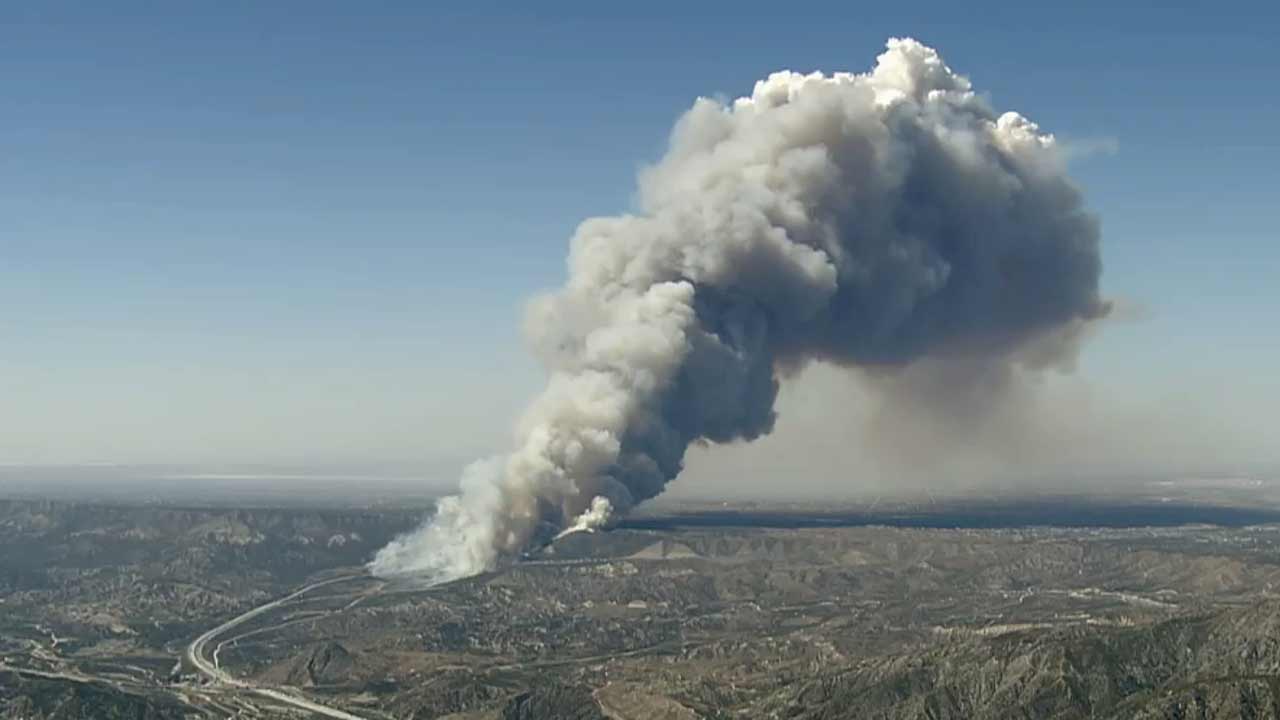 PHOTOS: Brush fire erupts next to 15 Freeway in Cajon Pass
A brush fire, dubbed the North Fire, broke out Friday, July 17, 2015 next to the 15 Freeway in the Cajon Pass. See photos above.

The road on the 15 Freeway where two semi-trucks and a boat trailer burned damaged the top level of concrete. Caltrans crews were working on repairing the damage overnight into Saturday. About 3,000 feet of guard rail was also destroyed.

The cause of the fire remains under investigation, but firefighters first responded to a report of a vehicle on fire on the northbound 15 Freeway between State Route 138 and Oak Hill Road. 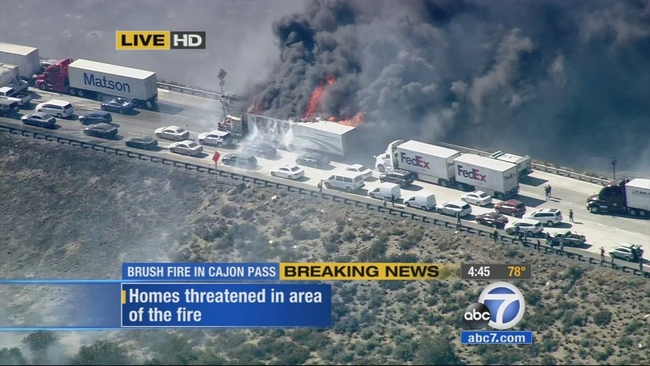 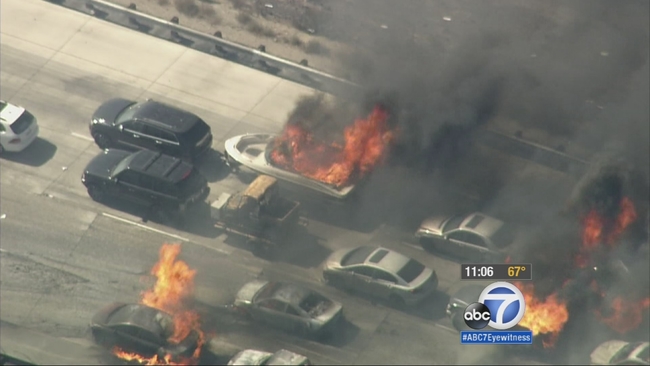 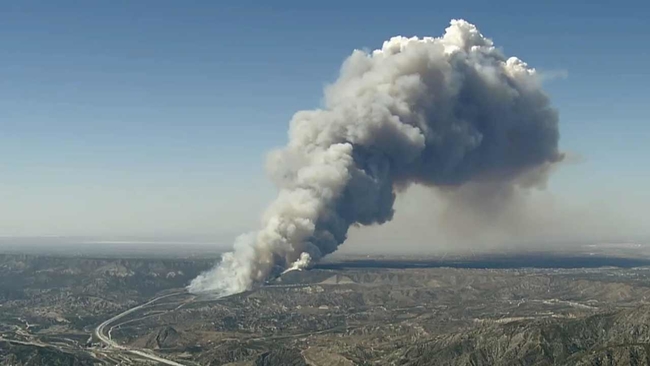