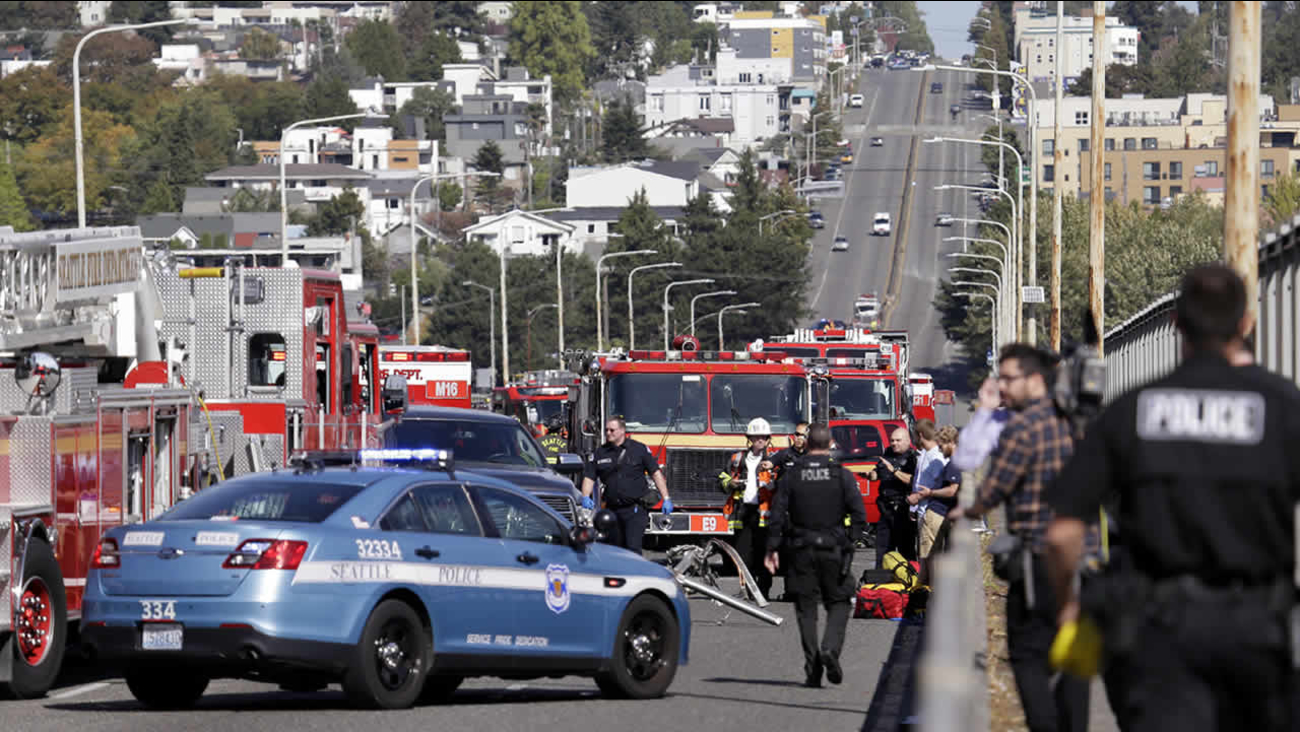 Emergency vehicles surround the site of a deadly crash between a charter bus and an amphibious tour vehicle in Seattle on Thursday, Sept. 24, 2015. (AP Photo/Elaine Thompson)

SEATTLE -- A Seattle duck boat that swerved wildly into an oncoming charter bus last week, killing five people and injuring dozens, did not have an axle repair that was recommended for at least some of the amphibious vehicles in 2013, the National Transportation Safety Board said Sunday.

Ride the Ducks International, which refurbished the boat in 2005, issued a warning to its customers two years ago about potential axle failure and recommended a specific repair or increased monitoring, NTSB member Earl Weener said.

"This particular duck had not had the fix," he told a news conference.

"We're going to be following that," he said.

A representative of the Seattle duck tour company said he did not have any immediate comment on the NTSB's account. The company said it has temporarily suspended operations after the crash, but Gov. Jay Inslee and Seattle Mayor Ed Murray announced Sunday night that the state wants to make it official by suspending the rides pending the outcome of an investigation.

Four international college students died at the scene of the crash, and a fifth - identified as a 20-year-old woman - died Sunday, Harborview Medical Center said. They were among about 45 students and staff from North Seattle College who were on the bus on the six lane bridge with no median when the tourist-carrying duck boat swerved into it.

More than 50 people were taken to hospitals. At least 15 people remained at Seattle hospitals Sunday, with four in intensive care and one in critical condition.

The amphibious vehicle tours are offered around the world, including in Philadelphia; Austin, Texas; Miami; Fort Lauderdale, Fla.; and London. They feature former military landing craft repurposed as tour vehicles.

The vehicle involved in the Seattle crash was an Army surplus craft built in 1945. It was refurbished with a General Motors engine and chassis in 2005, Weener said.

The NTSB had few details Sunday about the warning Ride the Ducks International issued. It wasn't clear what prompted the warning or how the potential failure was discovered, or whether it applied to all duck boats or only those that the company had refurbished, he said. It wasn't clear how many of the 100 duck boats in service nationally may have had the repair, he said.

The warning included specific instructions for inspecting the area where the shaft could fail, as well as instructions for the repair, which involved welding collars around the axle shaft, Weener said.

Results of the federal probe are not expected for a year, he said. Investigators have interviewed 11 surviving passengers, including eight who were on the duck, as well as first responders. They expect to interview the drivers of the charter bus and the duck this week.

Weener described Ride the Ducks of Seattle as cooperative, and said the company had turned over training records and maintenance documents for the duck.

It's the first time the NTSB has looked into a land crash of the amphibious vehicles, which critics say are too dangerous for city streets. The federal agency has scrutinized duck tour vehicles several times when they've been in accidents on water.

State regulators also have opened an investigation, which entails inspecting all vehicle and driver records. The Washington Utilities and Transportation Commission will meet Monday to discuss its authority to shut down the company until that review is complete, Inslee said.