One of These Is The Toy Gun Tamir Rice Was Holding 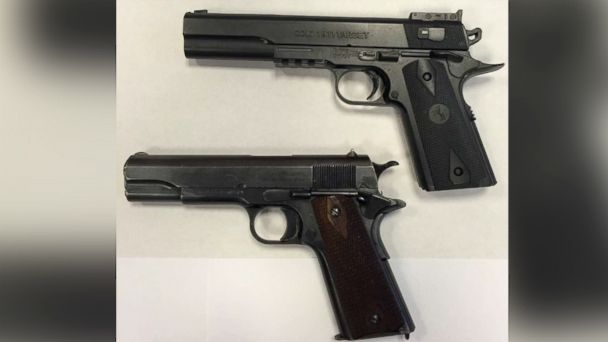 A photo released today by the Cuyahoga County Prosecutor's Office shows what it says is a real gun next to the replica gun 12-year-old Tamir Rice had the day he was shot dead by a Cleveland, Ohio, police officer.

Prosecutors said in a report released today that the gun Tamir was carrying -- at the top and right -- was "functionally identical" to the real one pictured at the bottom left.

The report came in the wake of a grand jury's decision today to not indict officer Timothy Loehmann or his partner, Frank Garmback, in connection with Rice's death. Rice had that toy gun when he was shot dead by Lohemann on a Cleveland playground in November 2014.

"Even to a trained eye, careful side-by-side comparison is required to notice the differences," the report says.

"During the tense, uncertain and rapidly unfolding moments of an actual encounter, the officer facing a suspect carrying what appears to be a gun often does not know if it is real or fake," the report said. "Worse, the officer will know that if he guesses wrong, that may be the end of his life."

The report said that an orange tip that would normally be on the fake gun was removed along with its laser sight in Tamir's case. Typically there is a warning on the packaging indicating that removing the orange tip of the gun "is dangerous, may cause confusion, may be mistaken to be a real firearm by law enforcement officers or others and may be a crime."

"Although there is evidence that on the day of the incident, at least two people warned Tamir about the dangerousness of using the gun in a public place, there is noevidence that Tamir ever saw any warnings from the gun's packaging," the report said.

Rice was killed in November 2014 after a concerned onlooker reported seeing someone with a gun at a local recreation center. However, information given to the 911 operator that the suspect may have been a juvenile and the gun may have been fake was never passed on to dispatch.

"The officers, who had no idea that the gun was fake or that Tamir was only 12, thought he was going to pull the gun out at them," the report said.

Cuyahoga County Prosecutor Timothy McGinty said today he recommended that no charges be filed against the officers. After the grand jury "heard all the evidence and the applicable law, they were told our recommendation," the prosecutor's office said. "But they made the final decision."

Rice's family was "disappointed" by today's outcome but not "surprised," his family's attorneys said. The attorneys said they are renewing their request for the Department of Justice to "step in to conduct a real investigation."

"As the video shows, Officer Loehmann shot my son in less than a second," his family said in a statement. "All I wanted was someone to be held accountable. But this entire process was a charade."

Rice's legal team insisted that Tamir's hands were in his pockets when he was shot.

"The toy was not out when the officers arrived. Watch the video," said Subodh Chandra. "A Ph.D in biomechanics said Tamir's hands were in his pocket. The prosecutor is covering up his own mishandling of the process."

Another lawyer, Earl Ward, called the side-by-side picture of the guns "a distraction."

"The officer could not have seen the gun, first because it wasn't out, and second, because he fired it in less than a second."

The U.S. Attorney's Office for the Northern District of Ohio said it will continue its independent review of the case to "determine what actions are appropriate, given the strict burdens and requirements imposed by applicable federal civil rights laws."

The Cleveland mayor said today the city will proceed with an administrative review of the incident now that the criminal process has ended.