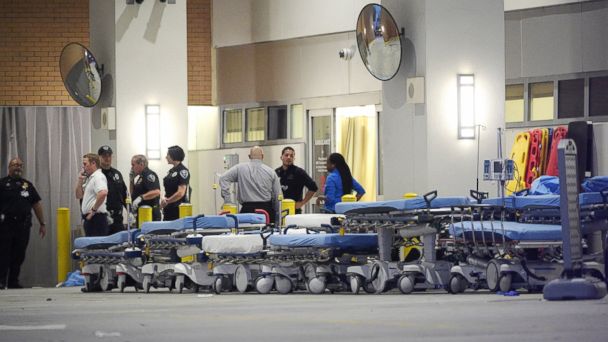 The Orlando hospital where nearly all of those injured in Sunday's nightclub shooting were brought for treatment has performed 26 surgeries on victims -- and more are expected today.

Orlando Regional Medical Center has treated a total of 44 people; nine of those individuals died after the shooting at the Pulse nightclub. Another six surgeries are scheduled for today, according to a statement from the hospital.

Dr. Michael Cheatham, chief surgeon at the Orlando Health Regional Medical Center, told ABC News that "many patients are going back for second and third operations."

Hospital officials recounted the scene on social media as dozens of patients arrived in a busy emergency department after the shooting.

Vascular surgeons and in-house orthopedic surgeons were called in to tend to the victims. Six trauma surgeons started performing operations on injured patients within one hour of their arrival. While gunshot wounds are a familiar injury in the emergency room department, the hospital usually sees six gunshot wounds at a time, not dozens.

Despite the hectic influx of patients, hospital officials said all went smoothly.

Hospital officials said they were optimistic about the prognosis of remaining patients. Half of the patients on ventilators have already been taken off the machine.

Cheatham told ABC News that it had been a "devastating day for many families" but that the medical staff was working to ensure that no other lives would be lost.

"The fact that we have not lost another victim yet is a testimony to the nurses, doctors and the non-medical staff providing care at Orlando regional," he said. "That's not to say those patients are out of the woods by any means, but the first 24-hour time period is critical in trauma, especially when you talk about gunshot wounds of this nature -- high velocity bullet wounds and they're getting unparalleled care there."