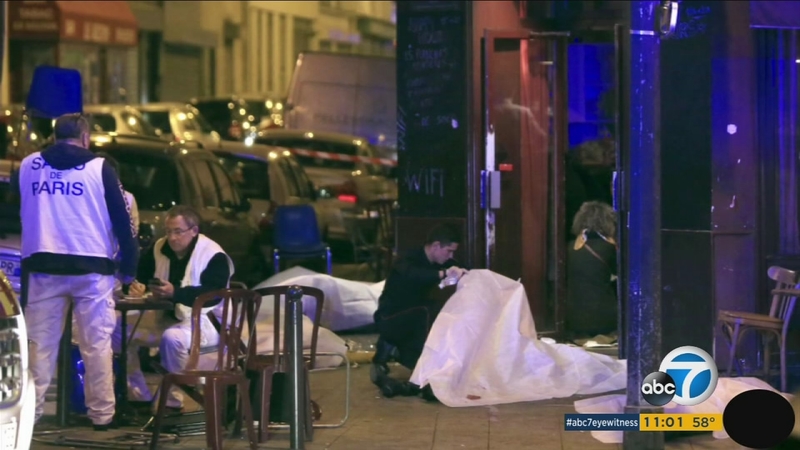 PARIS -- A series of attacks targeting young concert-goers, soccer fans and Parisians enjoying a Friday night out at popular nightspots killed at least 120 people in the deadliest violence to strike France since World War II. President Francois Hollande condemned it as terrorism and pledged that France would stand firm against its foes.

The worst carnage was at a concert hall hosting an American rock band, where scores of people were held hostage and attackers ended the standoff by detonating explosive belts. Police who stormed the building encountered a bloody scene of horror inside.

Paris Prosecutor Francois Molins said as many as five attackers were killed, though it was not clear how many there were altogether and how many, if any, were still at large. Other officials said seven attackers had been killed and that police were searching for other possible accomplices.

Authorities said the death toll could exceed 120 for at least six sites, including the national stadium and a tight circle of popular nightspots.

Hollande declared a state of emergency and announced that he was closing the country's borders, although officials later said they were just re-imposing border checks that had been removed after Europe created its free-travel zone in the 1980s.

Metro lines shut down and streets emptied on the mild fall evening as fear spread through the city, still aching from the horrors of the Charlie Hebdo attack just 10 months ago.

Southern Californians come together to mourn following the terror attacks in Paris on Friday, Nov. 13,2015.

The attack unfolded with two suicide bombings and an explosion outside the national stadium during a soccer match between the French and German national teams. Within minutes, according to Paris police chief Michel Cadot, another group of attackers sprayed cafes outside the concert hall with machine gunfire, then stormed inside and opened fire on the panicked audience. As police closed in, they detonated explosive belts, killing themselves.

Hollande, who had to be evacuated from the stadium when the bombs went off outside, later vowed that the nation would stand firm and united: "A determined France, a united France, a France that joins together and a France that will not allow itself to be staggered even if today, there is infinite emotion faced with this disaster, this tragedy, which is an abomination, because it is barbarism."

There was no immediate claim of responsibility for the attacks, although jihadists on Twitter immediately praised them and criticized France's military operations against Islamic State extremists.

In addition to the deaths at the concert hall, dozens were killed in an attack on a restaurant in the 10th arrondissement and several other establishments crowded on a Friday night, police said. Authorities said at least three people died when the bombs went off outside the soccer stadium.

All of the officials spoke on condition of anonymity because they were not authorized to be publicly named in the quickly moving investigation.

"This is a terrible ordeal that again assails us," Hollande said in a nationally televised address. "We know where it comes from, who these criminals are, who these terrorists are."

U.S. President Barack Obama, speaking to reporters in Washington, decried an "attack on all humanity," calling the Paris violence an "outrageous attempt to terrorize innocent civilians" and vowing to do whatever it takes to help bring the perpetrators to justice.

Two explosions were heard outside the Stade de France stadium north of Paris during a France-Germany exhibition soccer game. A police union official, Gregory Goupil of the Alliance Police Nationale, whose region includes the area of the stadium, said there were two suicide attacks and a bombing that killed at least three people near two entrances and a McDonalds.

The blasts penetrated the sounds of cheering fans, according to an Associated Press reporter in the stadium. Sirens were immediately heard, and a helicopter was circling overhead.

France has heightened security measures ahead of a major global climate conference that starts in two weeks, out of fear of violent protests and potential terrorist attacks. Hollande canceled a planned trip to this weekend's G-20 summit in Turkey, which was to focus in large part on growing fears of terrorism carried out by Islamic extremists.

Emilio Macchio, from Ravenna, Italy, was at Le Carillon restaurant, one of the restaurants targeted, having a beer on the sidewalk, when the shooting started. He said he didn't see any gunmen or victims, but hid behind a corner, then ran away.

France has been on edge since January, when Islamic extremists attacked the satirical newspaper Charlie Hebdo, which had run cartoons of the Prophet Muhammad, and a kosher grocery. Twenty people died, including the three attackers. The Charlie Hebdo attackers claimed links to extremists in Yemen, while the kosher market attacker claimed ties to the Islamic State group.

This time, they targeted young people enjoying a rock concert and ordinary city residents enjoying a Friday night out.

One of the targeted restaurants, Le Carillon, is in the same general neighborhood as the Charlie Hebdo offices, as is the Bataclan, among the best-known venues in eastern Paris, near the trendy Oberkampf area known for a vibrant nightlife. The California-based band Eagles of Death Metal was scheduled to play there Friday night.

Among the first physicians to respond to the wounded Friday was Patrick Pelloux, an emergency room doctor and former Charlie Hebdo writer who was among the first to enter the offices Jan. 7 to find his friends and colleagues dead.
How to locate friends and family following an emergency
During an emergency situation or following a natural disaster, the first thing many people think of is loved ones in the affected area.
The country has seen several smaller-scale attacks or attempts since, including an incident on a high-speed train in August in which American travelers thwarted an attempted attack by a heavily armed man.

France's military is bombing Islamic State targets in Syria and Iraq and fighting extremists in Africa, and extremist groups have frequently threatened France in the past.

French authorities are particularly concerned about the threat from hundreds of French Islamic radicals who have travelled to Syria and returned home with skills to stage violence.

Though it was unclear who was responsible for Friday night's violence, the Islamic State is "clearly the name at the top of everyone's list," said Brian Michael Jenkins, a terrorism expert and senior adviser to the president of the Washington-based RAND Corporation.

"The big question on everyone's mind is, were these attackers, if they turn out to be connected to one of the groups in Syria, were they homegrown terrorists or were they returning fighters from having served" with the Islamic State group, Jenkins said. "That will be a huge question."

With my photog Brandon at LAX headed to Paris to cover the tragic terrorist attack. @ABC7 #StandWithParis pic.twitter.com/VwOAIVuswH

.@ABC7DavidOno and photog Brandon Carrillo are travelling to Paris to bring you the latest on the terror attacks pic.twitter.com/FJX4sFCq66 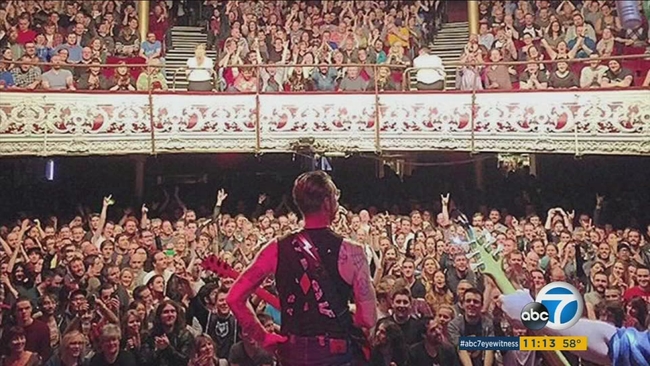 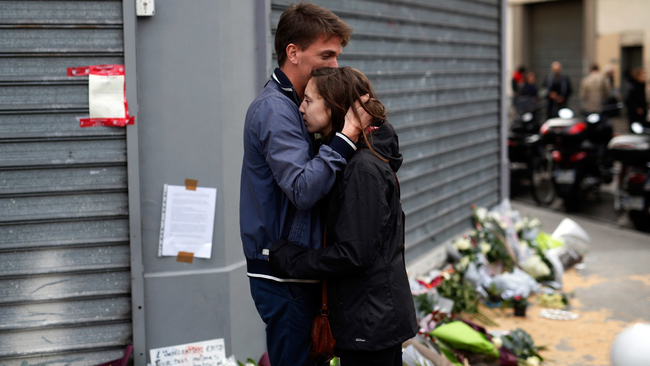