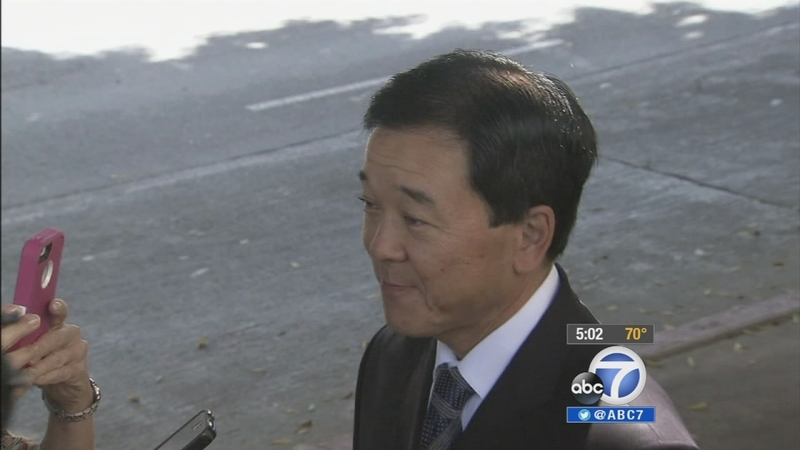 LOS ANGELES (KABC) -- Paul Tanaka, a candidate for L.A. County sheriff, tried to avoid a crush of media outside the federal courthouse on Friday after his testimony at the corruption trial of six deputy sheriffs. In the end, reporters and photographers chased him half way around the block before he stopped to answer questions.

"Unfortunately, this trial has become the focal point of the campaign. And that's just unfortunate -- that the public is not being allowed to hear what I would bring to the table as sheriff," Tanaka told reporters outside court.

Tanaka recently admitted that he is the "subject" of an ongoing federal investigation into obstruction of justice, the same investigation that led to the indictments of the six deputy sheriffs currently on trial.

"All the actions I took as far as I'm concerned were lawful and were done in a proper fashion," said Tanaka, who was second-in-command at the Los Angeles County Sheriff's Department at the time.

The defendants are accused of hiding inmate Anthony Brown after they learned he was a federal informant -- secretly feeding information about corruption and abuse to the FBI as part of their investigation into civil rights violations inside Men's Central Jail.

Brown was using a contraband cellphone behind bars, smuggled into him by a corrupt deputy bribed as part of an FBI sting. The plan to use that phone to document abuse or corruption unraveled when jailhouse deputies discovered the phone on Aug. 8, 2011.

On Friday, Tanaka told jurors about an urgent, high-level meeting convened by former Sheriff Lee Baca on a Saturday morning in August of 2011. That meeting came two days after Baca had been informed by the head of the FBI Los Angeles Field Office that the contraband cellphone belonged to the FBI, that it was part of their civil rights investigation into the jails - and they wanted their phone back.

Tanaka told jurors that Baca ordered an investigation into the inmate and the phone.

"That phone and that inmate are to go nowhere," Baca ordered, according to Tanaka.

Tanaka says he was concerned for Brown's safety - that he'd be harmed by deputies or other inmates who might view him as a snitch.
"Nobody better harm a hair on his head," Tanaka testified of his orders to the defendants.

But some courtroom observers aren't buying that argument. Miriam Krinsky is a former federal prosecutor and was Executive Director of the Citizens Commission on Jail Violence, which has endorsed Tanaka's rival in the race for Los Angeles County sheriff.

"If in fact this individual was being protected from other inmates, then why was an interview with another law enforcement agency -- the FBI -- terminated? Why was the FBI locked out of the jails? Why was he hidden under various names in jail facilities as opposed to being moved to the state system? So, the testimony failed to fully explain the actions of the defendants in a consistent way," says Krinsky.

Tanaka denies he gave any orders to change the inmate's name, move him to a distant station jail, or conduct surveillance of Brown's FBI handlers. However, Tanaka said he did not disagree with the defendants' actions when he learned of them during regular briefings on the operation.

Tanaka was asked by prosecutor Brandon Fox when he found out that two of the defendants, Sgt. Scott Craig and Sgt. Maricela Long, had conducted surveillance on Special Agent Marx.

"I did become aware of it either shortly before, during or after," said Tanaka.

Prosecutors have pointed out that by this point, Craig, Long and Tanaka had been informed by an L.A. Superior Court judge that they had no legal jurisdiction to investigate a federal law enforcement officer.

At one point during his testimony, Tanaka was admonished by Judge Percy Anderson. It came after a series of objections about whether Tanaka could testify as to Baca's state of mind after a meeting with U.S. Attorney Andre Birotte in late August of 2011.

Tanaka told jurors, "Sheriff Baca was able to communicate his unhappiness with the actions of the FBI -- of their committing a crime to investigate a crime."
Judge Anderson ordered the answer to be stricken from the record and angrily told Tanaka, "Don't do it again."

During questioning by defense attorneys on Friday, Tanaka said twice that he was not aware of a federal court order to turn the inmate over. Prosecutors later read back sworn testimony Tanaka had previously given to a federal grand jury about that court order -- or writ -- in which he said, "I'm sure I was aware of it. I don't recall it now."

Testimony and evidence introduced throughout this trial show that Tanaka received regular briefings, attended meetings and exchanged emails about the operation -- which seems to contradict what he told Eyewitness News during a lengthy interview in May of 2013. In that interview, Tanaka told Eyewitness News anchor David Ono that he was "out of the loop" on the operation after that Saturday meeting convened by Sheriff Baca.

"So at that point, I'm basically out of the loop, because now he's communicating directly to the captain and the lieutenant of the Internal Criminal Investigations Bureau," Tanaka then told Eyewitness News.

When asked about the apparent contradiction on Friday, Tanaka replied, "I've told you before, I did not say that. I told you that I could only tell you certain things. And you know, when I can only tell you chapter two when the whole book is 20 chapters. You can make of it what you want, I have never lied to you and that's the bottom line."

In Tuesday's primary election for L.A. County sheriff, Tanaka came in a distant second to Long Beach Police Chief Jim McDonnell. Four of the five other candidates for sheriff threw their support behind McDonnell on Thursday. Tanaka says he's staying in the race and preparing for the November run-off.

Tanaka returns to the witness stand on Tuesday.