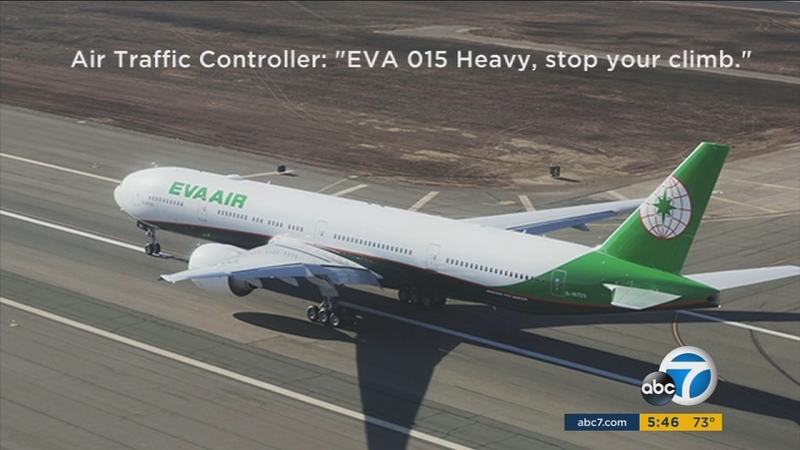 ANGELES NATIONAL FOREST (KABC) -- A safety expert talked about what could have occurred after an air traffic controller error sent a jet from LAX into the flight path of another plane and flying low over the mountains above Altadena.

The San Gabriel Mountains loom over Los Angeles and north of Los Angeles International Airport. Those are the mountains a San Diego air traffic controller mistakenly pointed a low-flying jetliner toward.

The Federal Aviation Administration said the plane was also headed toward another jet.

The controller was trying to get EVA flight 015 to turn his plane south, but that pilot didn't seem to grasp her directions.

Aviation safety expert Barry Schiff examined the air traffic control recordings of the mishap. He said last Friday's confusion in the air over the San Gabriel Valley could have easily been avoided.

"Pilots and controllers cross-check each other, and that keeps the system safe. In this case, the controller made a mistake, the pilot didn't catch it, and it led to what could have been a tragedy," Schiff said.

The EVA pilot eventually turned his plane safely to the south, avoiding the mountains and the other jet.

The FAA told Eyewitness News the two planes were able to stay a safe distance apart, but aviation investigators were now checking to see if the EVA jetliner was in danger of slamming into the mountains or Mt. Wilson's huge towers.

If that was the case, Schiff said safety equipment on that plane would have warned the pilot with very visible and loud alerts.

"'Pull up, pull up!' The mechanical voice would say, and the pilot responds to that and either turns away from the obstruction or climbs over it," explained Schiff.

A government source told Eyewitness News the air traffic controller has been temporarily removed from duty. Meantime, EVA Air said its plane never flew too close to the other jet or the mountains.