HIGHLAND PARKS, LOS ANGELES (KABC) -- The elderly at a senior center in Highland Park saw progress towards a bathroom renovation on Tuesday after delays plagued the project.

Those at the Highland Park Adult Senior Citizen Center were happy to hear the sound of a jackhammer after complaining to Eyewitness News about their restroom situation.

For nearly three months, the seniors have been using porta potties behind the center. Those who didn't want to use the porta potties had to cross busy streets to use toilets with running water at nearby businesses.

"They first promised us it would be finished in a couple of weeks, and then a couple of months, and they keep stretching and stretching," High Park senior Amalia Stibbard said.

After Eyewitness News took the seniors' complaints to the Los Angeles Department of Recreation and Parks on Monday, a crew was on hand Tuesday morning working on the restrooms.

The Department of Recreation and Parks did not state what caused the delays.

The senior center is in the district of Los Angeles Councilman Jose Huizar. A spokesperson for Huizar's office said the aim of the bathroom renovation was to comply with the Americans with Disabilities Act and to improve access for seniors.

The contractor on the job is listed as Child's Play out of Irvine. The company did not state what caused the project delays.

Seniors at the center signed a petition for Huizar on Tuesday, stressing their hope that a new subcontractor sticks to the job.

The newly hired plumber said he's starting from scratch, but hopes to have the project completed by the end of next week.

The seniors said they will be counting the days.
Related topics:
highland parklos angelestoiletseniorspark
Copyright © 2021 KABC-TV. All Rights Reserved.
RELATED 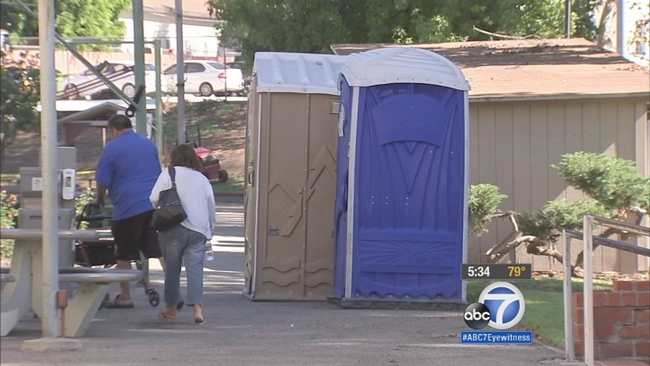