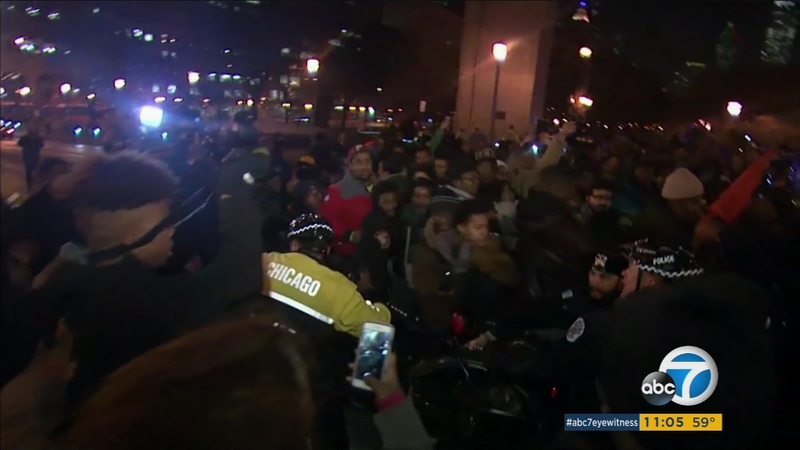 CHICAGO -- Laquan McDonald, 17, was shot 16 times by a Chicago police officer in October 2014. The police shooting video is graphic. Viewer discretion is advised.

About 200 protesters began marching through the city streets Tuesday night, only a few hours after the video's release. Some circled police cars in an intersection and chanted "16 shots."

Sister station WLS-TV reported that at least three people were arrested and one officer may have been injured when a fight broke out. Chicago Police Superintendent Garry McCarthy said the department was prepared to handle protests and urged for them to be peaceful.

The group, which is not talking to the media, consisted mostly of young people started at a community center. During most of the march, police officers - many of whom were on bicycles - attempted to stop traffic to allow protesters to move through the streets unharmed.

A judge ordered the city to release that disturbing video by Wednesday. However, sources leaked a shorter version to WLS-TV on Tuesday morning, prompting Chicago police to move up the scheduled release.

In light of public safety, WLS-TV did not air the video until it was officially released. Cook County State's Attorney Anita Alvarez said there was no audio on the official clip.

Alvarez described the video following a court appearance by the Chicago Police Officer Jason Van Dyke, who is charged with McDonald's murder.

McDonald's family did not want the video released, but a freelance journalist filed a Freedom of Information Act request.

The family said in a statement, "This is a difficult time for us. As we have said in the past, while we would prefer that the video not be released we understand that a court has ordered otherwise."

Concerned the release of such a video could lead to civil unrest, Chicago Mayor Rahm Emanuel and Police Supt. Garry McCarthy called for peaceful protests, as did McDonald's family.

"Will we use this episode and this moment to build bridges that bring us together as a city or will we allow it to become a way that erects barriers that tear us apart as a city?" Emanuel said.

"We ask for calm in Chicago. No one understands the anger more than us but if you choose to speak out, we urge you to be peaceful. Don't resort to violence in Laquan's name. Let his legacy be better than that," McDonald's family said.

The protests come one year ago to the day that violence erupted in Ferguson, Mo. after a grand jury did not charge officer Darren Wilson in the death of Michael Brown.

Chicago Mayor Rahm Emanuel called for calm after releasing the video of an officer shooting a teenager 16 times.