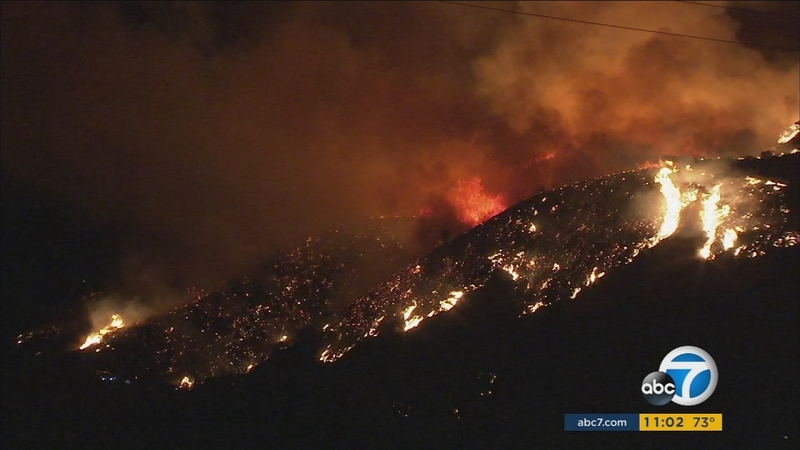 The raging fire destroyed 18 structures in its path in the areas of Sand Canyon, Bear Divide and Little Tujunga, and was threatening thousands of others. The destructive blaze has consumed approximately 35,155 acres, which is nearly 55 square miles. The containment remains at 10 percent.

Officials said all residents entering the area would need to provide identification. Authorities also urged those who did not need to return home immediately to wait until later in the evening to help with traffic congestion.

Fire crews dropped Phos-Chek fire retardant along the ridge of the fire, trying to prevent the flames from spreading.

Firefighters continue the battle against the Sand Fire, which has scorched more than 33,000 acres and destroyed more than a dozen homes in northern Los Angeles County.

Speaking at a Monday morning press conference, authorities implored homeowners to heed evacuation orders. Officials said civilians are creating a hazard for firefighters when they wait until the last minute to leave or try to get back to their homes when it is unsafe.

"[Firefighters] felt they lost additional structures because they had to stop what they were doing to help citizens evacuate," said L.A. County Fire Chief Daryl Osby.

CHP Sgt. Kevin Pack said residents trying to get back to their homes have nearly run over officers and deputies.

More than a dozen homes in the path of the massive Sand Fire were burned down to the ground.

"If you see smoke and fire coming in your direction, don't wait for a police officer or a deputy or a firefighters to say 'go,'" said L.A. County Fire Department Deputy Chief John Tripp.

"To those who are still here, if we ask for a mandatory evacuation, there's a reason we're doing that, it's to protect all the public," Los Angeles County Sheriff Jim McDonnell said.

Officials are concerned about weather conditions, as winds are expected to remain in the 25 to 30 mph range Monday evening. Winds are forecasted to die down overnight, with conditions remaining less windy for Tuesday morning.

Fire behavior was expected to be similar to previous days, as fire crews continued to respond to the five-year drought, low humidity and extreme temperatures causing the fire to move quickly.

"The significant amount of fuels on the fire are like 30 years old, so they're decadent. They've created explosive conditions," said Chief Mike Wakoski, incident commander of SoCal Team 3.

L.A. County Board Supervisor Michael Antonovich addressed the topic of Super Scoopers. The county leases them from Canada after the end of Canada's fire season, but that isn't until next month.


The structures destroyed by the Sand Fire include five buildings associated with the Bear Divide Ranger Station. Four of those structures were occupied by Forest Service employees, and three of those employees were firefighting personnel. Two were fighting the Sand Fire, and one was battling another fire in the San Diego area, according to Angeles National Forest Fire chief Rob Garcia.

The Sand Fire has charred an average of 10,000 acres per day, Tripp said. He estimated that approximately 2,000 homes have been saved in the past three days. He said the areas of Sand Canyon and Via Princessa are currently being checked and hoped to repopulate those areas sometime Monday.


A man's body was found in a burned sedan in the 26700 block of Iron Canyon Road, which is near one of the neighborhoods where a home had burned.

More than 3,370 fire personnel from throughout the state were helping battle the fire, along with 435 engines, 22 dozers, 17 water tenders, 23 helicopters and two firefighter rescue teams. Two firefighters were reported to have suffered minor injuries in the firefight as of Monday morning.

The blaze broke out Friday afternoon along the northbound 14 Freeway near Sand Canyon. The cause of the fire is under investigation.