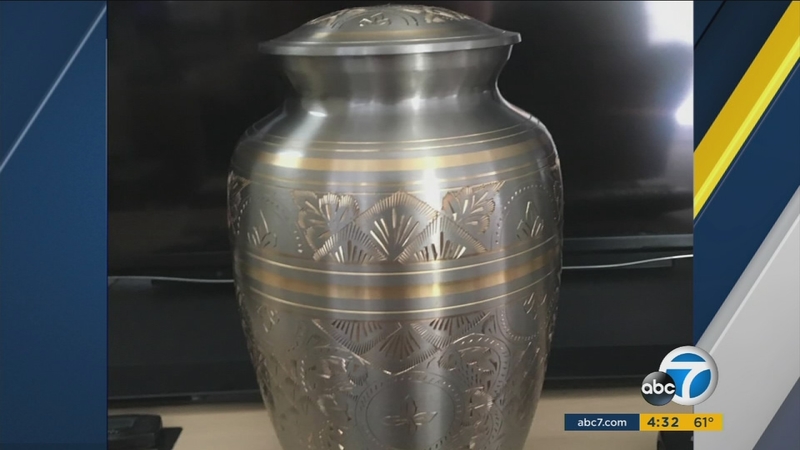 Family pleads for stolen urn with ashes to be returned

SANTA CLARITA, Calif. (KABC) -- A woman whose husband died in July after nearly three decades of marriage said she feels like she lost him all over again after the urn containing his ashes was stolen on Monday.

Cathy Fiddler's U-Haul trailer was brazenly stolen, and along with it, her husband's ashes.

"Devastation, I was completely and utterly screaming inside (and) bawling," Cathy Fiddler recalled. "I couldn't believe everything was gone, even Bart was gone."

Cathy Fiddler, who was married to Bart for 27 years, was moving back to Santa Clarita when she stopped for the night at the Sleep Inn in Barstow.

When she woke up the U-Haul was gone.

"He meant the world to me and that's all we had left of him," Cathy Fiddler said. "It's the only thing I really, really care about at this moment. Everything else can be replaced."

Bart died after a two-year battle with cancer. The couple had four children together.

"To me, it just didn't feel real. I just couldn't believe it. It was just a really bad nightmare," explained Rachel Fiddler, the daughter of Bart and Cathy Fiddler.

Barstow police found the U-Haul trailer on Monday, but it was empty.

"I'm really hopeful that the more awareness that we get the luckier we'll be that he'll be recovered," Rachel Fiddler said.

The Fiddlers hope someone may see the urn or that the thieves still have it and would be moved to do the right thing.