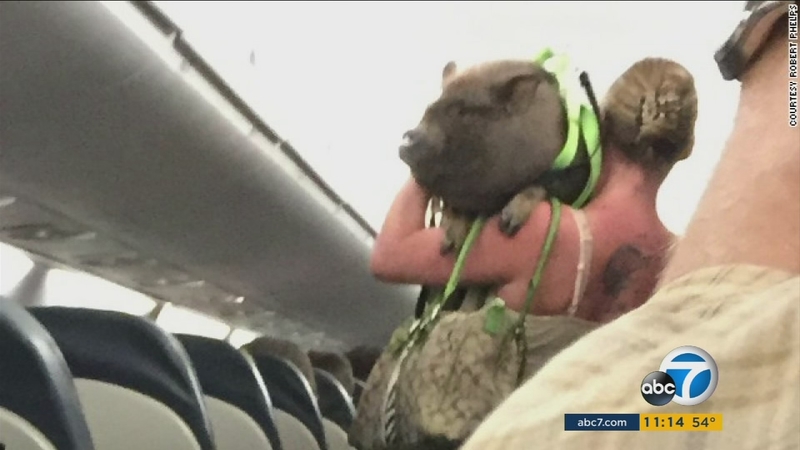 LOS ANGELES (KABC) -- Service dogs on an airplane guiding and comforting their owners are an expected sight - but what about cats, lizards, ducks, even pigs?

Airline employees say they're seeing a wider range of animals with the "service" designation.

But a backlash is building over concerns that more and more airline passengers are skirting the rules to fly their pets for free.

And some therapists and other professionals may be making it far too easy for owners to obtain a "service" or "emotional support" designation for their pets.

A producer at a sister station to ABC7 was able to obtain an emotional support animal designation from Black simply by filling out an online survey. His responses described, among other things, feeling stress at work several times a year and bad memories from 9/11.

She found the producer "qualified for an ESA" which she said "are recognized as appropriate therapeutic treatments for persons experiencing these types of disorders."

But experts in medical ethics said in general, diagnoses should be issued only when the therapist has met in person with the patient.

"You can't diagnose somebody that you haven't met," said Ben Caldwell, who sits on the ethics committee for the American Association for Marriage and Family Therapy, speaking for himself not the organization.

Caldwell says Black's diagnosis without having seen the producer falls below the standard of care expected from trained therapists.

Black declined to speak on camera with Eyewitness News. But she issued a lengthy statement, stating in part that she based her diagnosis on the producer's answers to a "comprehensive questionnaire containing over 70 questions."

The state agency that licenses therapists won't confirm if Black is now under investigation, but did contact the producer for additional information after he filed a complaint about Black's diagnosis.

When asked to comment on a hypothetical scenario in which a therapist diagnoses a person only based on an online quiz, the agency said it's "likely" such a therapist "may be in violation of the laws and ethical standards governing their profession; thus, subjecting their license to disciplinary action."

For the truly disabled, like Glen Gregos of Woodland Hills, faking a service animal is outright fraud.

His dog Kalea helps him get around and is trained in about 50 different tasks.

"It's just that when people abuse the system it makes it much harder for the truly disabled that need and depend on these dogs," Gregos said.
Related topics:
sherman oakslos angeleswoodland hillsair traveldisability issuestherapyfraudservice animal
Copyright © 2021 KABC-TV. All Rights Reserved.
More Videos
From CNN Newsource affiliates
TOP STORIES