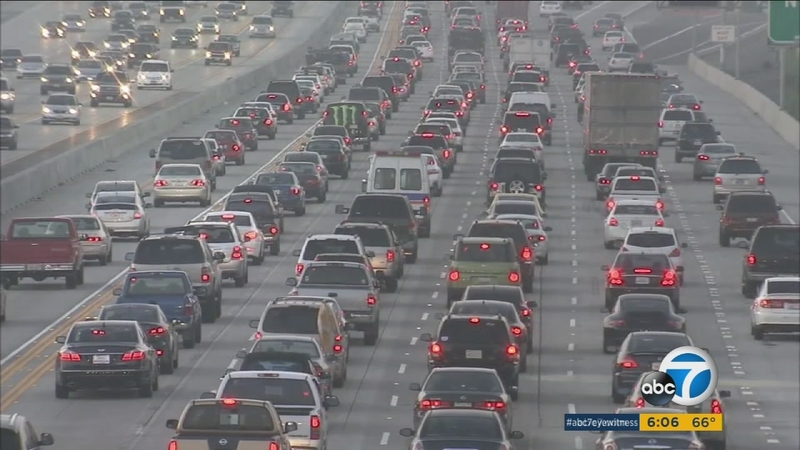 LOS ANGELES (KABC) -- A study by American Highway Users Alliance, an advocacy group, found the nation's worst traffic bottlenecks and many spots in Los Angeles ended up on the list.

Chicago's Kennedy Expressway may have been the worst spot in terms of hours of delay, but nine spots in the Southland ended up in the top 15.

The worst place in Southern California for getting stuck in traffic is the 405 Freeway, right between the 22 and 605 freeways.

"It's only 4 miles long, but it takes a motorist an extra 114 minutes - that's almost 2 hours - to get through that area," said Greg Cohen with American Highway Users Alliance.

The latest rankings are based on backups in both directions throughout the day. According to the survey, the top 30 bottlenecks result in more than 90 million hours of lost time each year. The price of those delays to our economy comes out to nearly $2.5 billion a year.

"It's not simply a bottom line issue. It's a safety issue. It's an environmental issue. It's a stress issue and it's certainly a time consuming issue," said Bill Graves with the American Trucking Association.

It's that lost time that grates most people. A former Wyoming resident said spending so much time in traffic was surprising to him because it would never take that long in his home state.
Related topics:
los angeles countystudyfreewaytraffictraffic delay
Copyright © 2021 KABC-TV. All Rights Reserved.
TOP STORIES
CDC document warns delta variant spreads as easily as chickenpox
Mother, infant ejected from vehicle in Torrance crash
Corona movie theater shooting suspect to appear in court Friday
ABC7's Adrienne Alpert signs off after 25 years at KABC
Pantages Theatre to require proof of vaccination for ticket holders
CDC mask decision followed stunning findings from Cape Cod outbreak
Biden to allow federal eviction moratorium to expire tomorrow
Show More
Man beaten outside NoHo hookah lounge says attack was a hate crime
Simone Biles and 'the twisties': How fear affects safety in gymnasts
LAUSD to require COVID-19 testing for all students, staff
What we know about the delta variant
Mom who gave birth to 9 thriving babies at same time speaks out
More TOP STORIES News