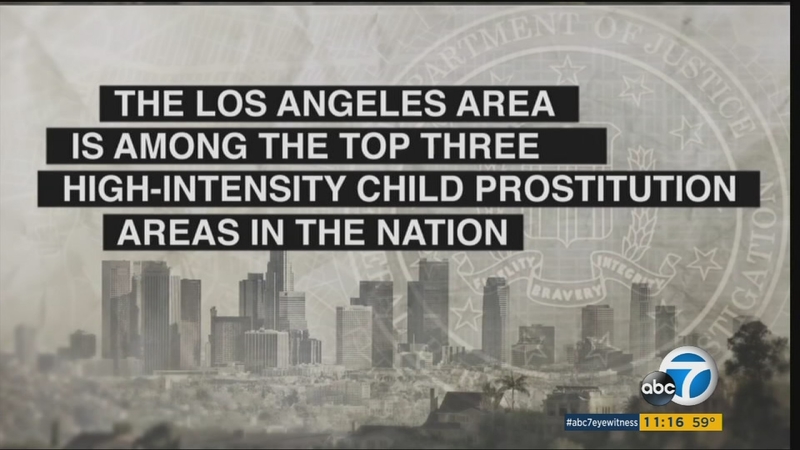 LOS ANGELES (KABC) -- "They could be your daughter and you may not even know it," Dr. Stephany Powell stated as she described victims of human trafficking.

Powell first got to know victims while working for the Los Angeles Police Department's VICE squad. Currently, she runs a non-profit called Journey Out that helps sex trafficking victims recover.

Powell said if someone engaged in prostitution is being "pimped," that person is considered a victim of human trafficking. According to Journey Out, the Los Angeles area is among the top three high-intensity child prostitution areas in the nation.

The average age of entrance into commercial sex trafficking is 12 to 14 years old.

"The biggest misconception is it is only happening to children," said Powell. "The victimization of this does not have an expiration date."

"When you're coerced or you're manipulated, you're a victim," Powell continued.

If victims complete the Journey Out program, they can have their criminal prostitution cases dismissed.

"We meet the person where they are and we help them in their journey out of violence and abuse," Powell explained.

ABC7 interviewed one of the victims helped by Powell. We agreed not to reveal her true identity for her own protection. For the purposes of this story, ABC7 will refer to her as "Jennifer."

Jennifer was a master's student at a local university when she met a man she thought was her boyfriend. Within one month of dating, he asked her to prostitute herself.

"He knew I didn't have any money in my bank account, he knew I wanted some independence and with all of this, he was conniving, manipulative," Jennifer said.

Jennifer didn't turn down his offer.

They would post profiles of Jennifer on various adult themed websites and Jennifer said she'd meet up with men at hotels.

"Every time you do it, you feel like you are getting raped for money," she described.

Jennifer said her pimp never gave her the money he promised, not even a dime. Once, a man she thought was a client turned out to be an undercover police officer on a sting.

After some time behind bars, she temporarily went back with her pimp. Then, she ran away from him and temporarily tried to disappear from society. She was hiding with a friend as her parents searched for her. Jennifer's father eventually found out where she was hiding.

"I'd heard knocking at the door and I walked outside the door and I see my dad and the first thing he did was break into tears and he just started sobbing. He said, 'I thought something had happened to you,' and in that moment, I knew everything was done and I was flown out the state for three months," Jennifer said. "I had no hope."

Eventually Jennifer turned to Journey Out for help. The program worked so well for Jennifer, she continues to mentor other victims. Powell said it's part of a larger shift in the way police and prosecutors are treating the human trafficking issue.

She said law enforcement is now more focused on rehabilitating victims instead of simply prosecuting them.

"We need to have a paradigm shift in the way we look at this particular subject manner," Sgt. Ron Fisher with the LAPD said. "A lot of times we'll have persons who say they're voluntarily, willingly engaging in that activity and it's a victimless crime. It couldn't be further from reality."

The LAPD's vice unit invited ABC7 to shadow officers for an evening's patrol in the San Fernando Valley. Within a short time on patrol, ABC7 and LAPD spotted a man pick up a woman in his car, stop by an ATM, park the car and engage in sexual activity.

The officers took the man into custody while he was still naked. It was one of several arrests within a few hours.