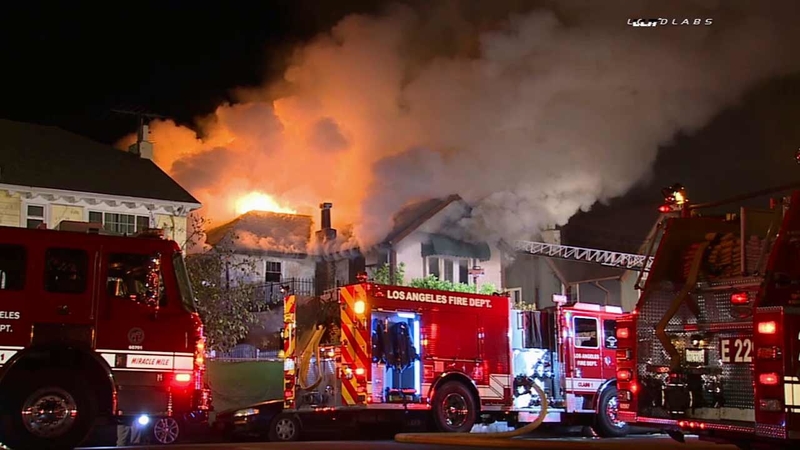 The blaze broke out at a residence in the 800 block of S. Crenshaw Boulevard at about 1:07 a.m., Los Angeles Fire Department officials said.

Two firefighters were injured battling a fire at a two-story home in the 800 block of S. Crenshaw Boulevard in Koreatown on Wednesday, Nov. 18, 2015.

LAFD spokesman Brian Humphrey said the firefighters were hurt when a section of the ground floor of the residence collapsed.

"Mayday was called, and we immediately went into that procedure. We always have rapid intervention companies standing by so 99 times out of 100 they don't have to do anything, but in this case they gaged," LAFD Capt. Daniel Curry said.

The two injured firefighters were pulled from the rubble in minutes.

One of the firefighters suffered a sprained ankle, and the other was hospitalized with second-degree burns over 10 percent of his body and small burns on his hands, Humphrey said.

Over 100 firefighters knocked the blaze down in about 90 minutes.

Investigators say squatters may have been using the apartment when it caught fire.

"We're finding evidence of human activity inside these structures so we believe there were squatters inside. They have hot plates and those types of things, so it's possible. At this time, arson is still investigating what exactly happened," Curry said.

The exact cause of the fire remains under investigation.

FDA allows emergency use of Pfizer COVID-19 vaccine in teens
Get paid to take a nap for new study
Mother Day's party in Hollywood turns deadly after shooting
Bill and Melinda Gates divorce was in the works for 2 years
Tiger roaming Houston neighborhood owned by man on bond for murder
Show More
Great Wolf Lodge in OC has 200 jobs up for grabs
Fauci: It may be time to relax indoor face mask mandates
Newsom declares drought emergency for 39 CA counties
Caitlyn Jenner: CA immigrants should have path to citizenship
Another shooting reported on SoCal roads
More TOP STORIES News