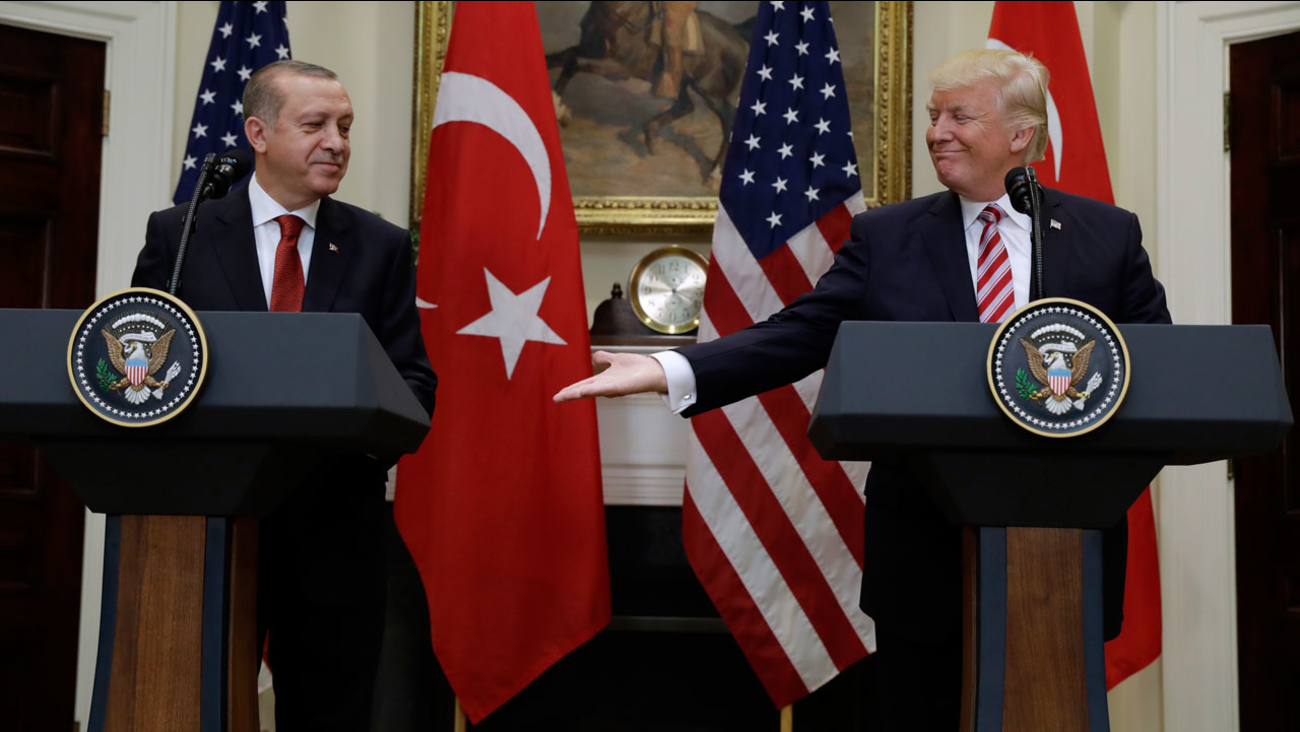 WASHINGTON -- U.S. officials strongly criticized the Turkish government Wednesday as video appeared to show its president's security forces pushing past police and violently breaking up a protest outside their diplomatic residence in Washington.

Attacking the small group of protesters with their fists and feet, men in dark suits and others were recorded repeatedly kicking one woman as she lay curled on a sidewalk. Another wrenches a woman's neck and throws her to the ground. A man with a bullhorn is repeatedly kicked in the face. In all, nine people were hurt.

The clash happened at the Turkish ambassador's residence Tuesday as President Recep Tayyip Erdogan arrived after a White House meeting with President Donald Trump. Video shows people pushing past police to confront a small group of protesters across the street in Sheridan Circle.

Turkey's official Anadolu news agency labeled the protesters Kurdish "supporters of terror." It said they chanted anti-Erdogan slogans, and that Erdogan's team moved in to disperse them because "police did not heed to Turkish demands to intervene."

In a statement, the Turkish Embassy blamed the violence on the demonstrators, saying they were "aggressively provoking Turkish-American citizens who had peacefully assembled to greet the President. The Turkish-Americans responded in self-defense and one of them was seriously injured."

A Voice of America video showed police officers struggling to protect the protesters and ordering the men in suits to retreat. Instead, several of the men dodge the officers and run into the park to continue the attacks.

"Violence is never an appropriate response to free speech, and we support the rights of people everywhere to free expression and peaceful protest," State Department spokeswoman Heather Nauert said in a statement. "We are communicating our concern to the Turkish government in the strongest possible terms."

Politicians weighed in as well. D.C. Mayor Muriel Bowser called it a "violent attack on a peaceful demonstration," and said it "is an affront to DC values and our rights as Americans."

"This is the United States of America. We do not do this here," Sen. John McCain commented while retweeting the video. "There is no excuse for this kind of thuggish behavior."

Sen. Patrick Leahy's tweet said "We've got to come back to American values."

Two men were arrested at the scene, and police intend to pursue charges against others involved, the Metropolitan Police Department said Wednesday.

"The actions seen outside the Turkish Embassy yesterday in Washington, D.C. stand in contrast to the First Amendment rights and principles we work tirelessly to protect each and every day," the police statement said. "We will continue to work with our partners at the United States State Department and United States Secret Service to identify and hold all subjects accountable for their involvement in the altercation."

There may be issues with diplomatic immunity, Police Chief Peter Newsham said at a news conference Wednesday. He said police were examining video to identify those responsible.

The background of the two men arrested wasn't immediately clear.

Ayten Necmi, 49, of Woodside, New York, was charged with aggravated assault, police said, after a woman who was thrown to the ground and kicked identified Necmi as her attacker.

Jalal Kheirabadi, 42, of Fairfax, Virginia, is charged with assaulting a police officer, who refused treatment for lacerations to his face.

Kheirabadi told The Associated Press on Wednesday that he joined the demonstration, saying "Erdogan is a terrorist" and "Mr. Trump, please say no to Erdogan," when Turkish security staff "just attacked us."

"It happened really fast," he said, insisting that he was trying to defend himself and to protect a police officer, not attack one. Kheirabadi said he is a Kurd who passed through Turkey as a refugee and is now a U.S. citizen.

Court paperwork spells his name Kheirabaoi, but he said that is incorrect. The document says he struck an officer in the face while the officer was trying to separate protesters and that he "engaged in a physical confrontation" with the officer. Online court records say he must return to court June 1 and Necmi on July 12.

The biggest dispute between Turkey and the U.S. recently has been the Trump administration's plans to arm Kurdish Syrian militants fighting the Islamic State group.

The U.S. sees the Syrian Kurds as its best battlefield partner on the ground in northern Syria. Turkey insists that these YPG militants and their PYD political party are tied to the Kurdish insurgency in Turkey known as the PKK, which the U.S., the European Union and Turkey all consider a terrorist organization.

At their meeting Tuesday, Trump said the U.S. would re-establish its military and economic partnership with Turkey, committing to backing Turkey's defense against both Islamic State and the PKK. Such groups will "have no safe quarter," Trump said.

Erdogan responded that there is there is no place for any Kurdish "terrorist organizations" in any agreement about the region's future.
Related topics:
fightpoliticsu.s. & worldviolencepresident donald trumpturkey
Copyright © 2021 by The Associated Press. All Rights Reserved.
More Videos
From CNN Newsource affiliates
TOP STORIES