Supporters of immigrant kids gather at Ventura naval base 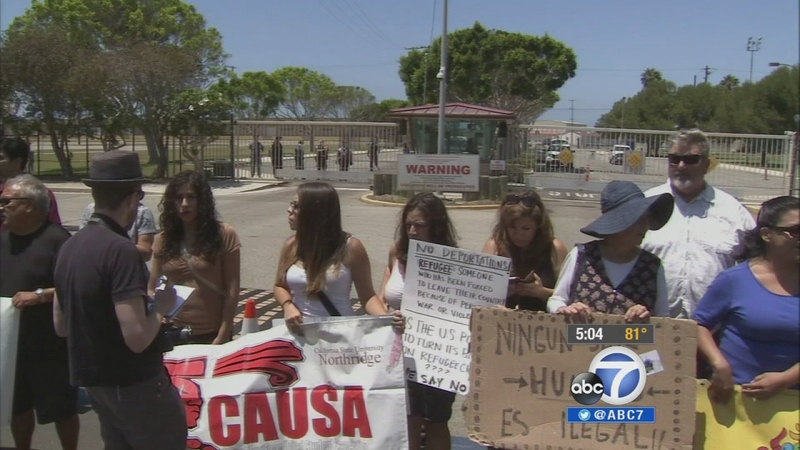 Supporters of immigrant kids gather at naval base

PORT HUENEME, Calif. (KABC) -- The battle over the immigration crisis has shifted from Murrieta to Port Hueneme on Tuesday. Protesters on both sides demonstrated outside Naval Base Ventura County, where some undocumented children are being housed.

President Obama has asked Congress on Tuesday for emergency funding on the issue.

Officials got a tour of the facility housing those children Tuesday.

Supporters chanted and prayed at the front gate of the naval base. They came to support hundreds of children who are housed there temporarily. The children crossed the border illegally into the United States.

Several pastors and California senators toured the facility Tuesday. Cameras were not allowed inside.

"When I saw these kids, I saw myself," said Marta Arevalo, executive director of the Central American Resource Center (CARECEN). "As a parent, sometimes you have to make difficult decisions and these parents and these children are having to make life-and-death decisions."

"They are leaving very violent situations and to see what their options are for them and their family. We know that some of them have families in the United States. What is being done to make sure that they connect with those families?" said state Senator Ricardo Lara (D-Bell Gardens).

Some people who came to the event Tuesday however feel immigrants who enter the country illegally should not be allowed to stay.

"Once they get in this country, they're not going to leave," said local resident Joan Dawson. "We don't even know what kind of people they are. They could be persecuted. They could be gang members. Some of these kids are almost 18 years old. Once they come to this country they're just going to disappear."

President Obama is asking Congress for $3.7 billion to cope with the tide of minors from Central America: $1.1 billion would be to increase enforcement along the border; $433 million to cover overtime and facilities to detain unaccompanied children and $1.8 billion for care of the children, including shelter and medical needs.

"We are seeking a greater authority for the Secretary of Homeland Security to exercise greater discretion that would allow him to more efficiently and effectively remove and repatriate immigrants to this country that don't have a legal basis for remaining here," said White House Press Secretary Josh Earnest.

The president will visit Texas, but he isn't going to visit the border. Critics say he should go see the issue firsthand.

"Which makes it all that much more inexplicable why he would refuse to carve out just one hour out of his fundraising schedule in the next two days in Texas to come to the border at the site of what he calls a humanitarian crisis," said Senator John Cornyn (R-Texas).

The Pentagon says it's currently housing about 2,700 unaccompanied minors.