KABC
By Leanne Suter
DOWNTOWN LOS ANGELES (KABC) -- New surveillance video shows a suspect wanted in connection with a weekend shooting at The Standard Hotel in downtown Los Angeles that left a 22-year-old man dead and three others wounded.

Police first received a call about a fight at the hotel located at 550 S. Flower Street at about 2:30 a.m. on Sunday. Shortly after, shots were reported.

Police now hope the public can help identify the man suspected in the shootings that took place in the front and rear parking lots of the hotel.

"We're hoping with the video and the surveillance video from the elevator that somebody could recognize him," Officer Mike Lopez with the Los Angeles Police Department said.

In the video, a man can be seen in a long black trench coat following a friend as they get into the elevator to go up to the bar at the top of the hotel.

A short time later, the pair is seen waiting go to back downstairs.

Once outside, investigators said the pair got into a fight with four other men. The suspect in the black trench coat pulled out a gun and opened fire, and according to police, even chased down 21-year-old Thomas Johnson as he ran for his life.

"One of the victims was able to run behind The Standard Hotel, and the suspect followed our victim and shot him multiple times," Lopez said.

Johnson later died at the hospital.

One of the other victims returned fire with his own gun and the suspect and his friend fled the scene.

MORE: 1 killed in shooting outside The Standard Hotel in DTLA

The suspect is described as a black man, about 5 feet, 10 inches tall with cornrows and a mustache.

Given his bold and brazen actions, police said they want to track him down as quickly as possible.

"He was probably pretty upset about what happened and obviously he wanted to take matters into his own hands, and obviously he was so adamant to get the individual probably responsible for the fight and shot him in the back of the hotel," Lopez said.

Anyone with information about the shooting or the suspect is urged to Crime Stoppers at (800) 222-8477. Callers can remain anonymous.
Related topics:
downtown lalos angeleslapdshootingman shotman killedsurveillance video
Copyright © 2020 KABC-TV. All Rights Reserved.
RELATED 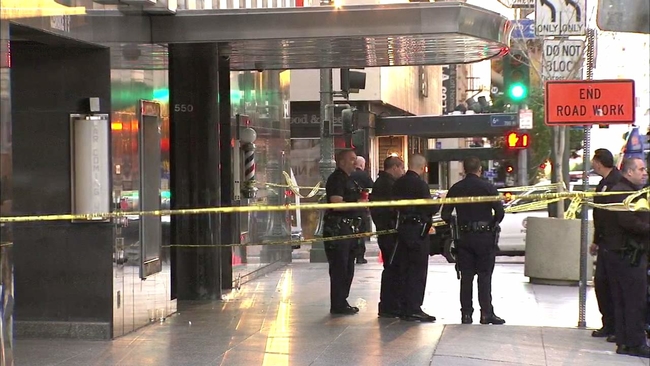