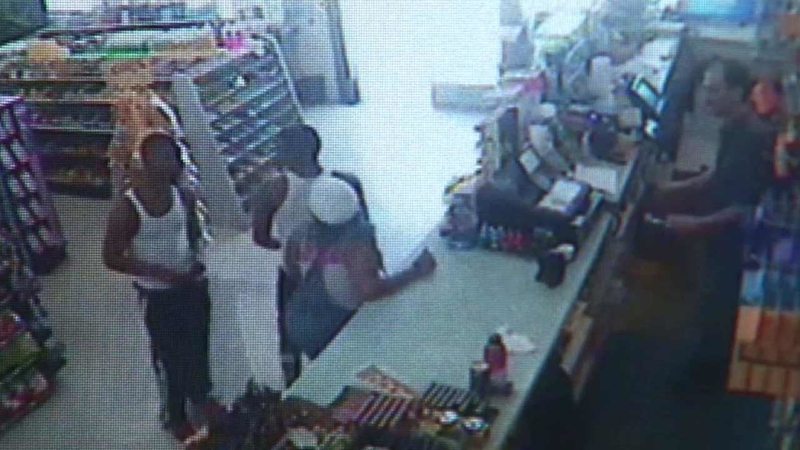 SAN BERNARDINO, Calif. (KABC) -- San Bernardino police are searching for a suspect who allegedly gunned down a 22-year-old man following an argument inside a liquor store involving the victim's mother.

The shooting occurred outside an apartment complex up the street from the Superior Liquor & Grocery store in the 2900 block of Del Rosa Avenue on Oct. 13.

Surveillance video captures the suspect walking out of the liquor store. As he leaves, he exchanges words with the victim, later identified as 22-year-old Lorenzo Battle.

Police said the suspect made said some kind of comment about Battle's mother.

"I don't know what exactly the words were, something to the effect of 'what's up with that blue hair?'" Lt. Rich Lawhead said.

That's when the argument allegedly began.

"Nothing physical or anything else, obviously loud exchanged words and then they exit the store," Lawhead adds.

The suspect and Battle and his mother both leave, but Lawhead says the incident doesn't end there.

Police say the suspect, who may have had two other people in the car with him, followed Battle up the street to an apartment complex, and then opened fire, killing him.

Lorenzo Battle was fatally shot on Tuesday, Oct. 13, 2015 following an argument inside Superior Liquor & Grocery in the 2900 block of Del Rosa Avenue in San Bernardino.

A memorial now sits in the middle of the dirt field where Battle collapsed and died. Investigators say the shooting is gang related.