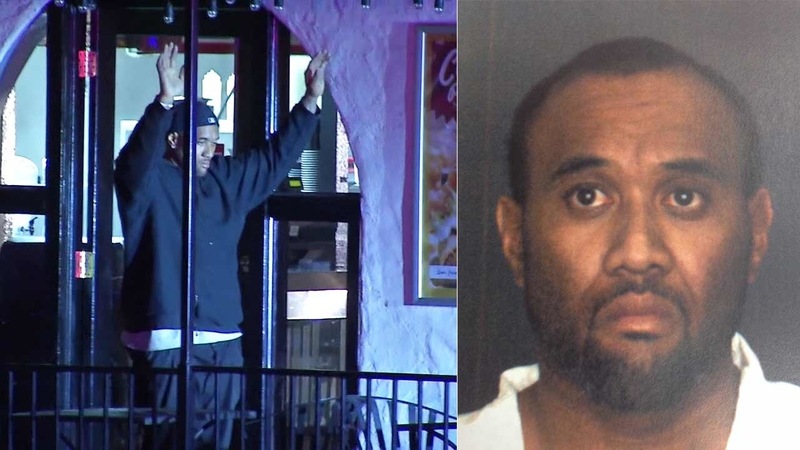 COLTON, Calif. (KABC) -- A man allegedly fatally shot his girlfriend at a gas station parking lot in Colton and then killed his father at his Moreno Valley home before traveling to San Diego, where he held a restaurant worker hostage before he was detained, authorities said.

At shortly past 5:30 p.m. Wednesday, Colton police responded to a shots fired call outside an AMPM gas station on the 1200 block of E. Washington Street.

Crime scene tape ropes off the scene of a fatal shooting in Colton on Wednesday, Dec. 23, 2015.

When officers arrived, they found a woman who had been shot in the upper body, pinned between two cars. The 37-year-old victim was rushed to Loma Linda University Medical Center, where she died.

Police say the suspect, later identified as 38-year-old Jason Barton, rammed his girlfriend with his car during an argument at the gas station and then fatally shot her.

"I heard like six or eight shots, and it made my heart pump really hard because like, 'Oh my gosh, was that gun fire?'" said Iris Haynes, who works in Colton. She was driving home from work when the shooting happened.

Barton then stole a vehicle and fled the scene heading eastbound on Washington Street toward his home in the 23600 block of Lake Valley Drive on Moreno Valley. Police say that's where Barton shot two people, including his father who was pronounced dead at the scene.

Crystal Brown lives across the street from the house. She said Barton was her neighbor, who had grown up there. She said the first shot went off at 5:50 p.m.

"Then three shots were heard after. I ran out, I saw the guy on the floor in front of the Corvette, and then I heard screaming," Brown said.

Deputies said at least one other person was shot at that location.

Barton then allegedly drove to San Diego and ditched the car. Police found the vehicle and were eventually called to a taco shop at 42nd Street and Orange Avenue in Mission Hills shortly past midnight.

The suspect took a worker hostage at the restaurant. That employee was released unharmed and police took the suspect into custody. Investigators said they are not looking for any other suspects.

Officials say through the course of the investigation, they determined the incidents in Colton and Moreno Valley were connected, but Barton's motives remain unclear.

"Right now, it looks like paranoia. Our investigators are saying that he was under the influence of a stimulant or methamphetamines," Colton police Cpl. Ray Mendez said.

Barton was on parole at the time of these alleged crimes. His previous conviction was for assault with a deadly weapon.