KABC
By Rob McMillan and ABC7.com staff
RIVERSIDE, Calif. (KABC) -- A search is underway for a man who Riverside police say followed a woman, purposely rear-ended her car, robbed her and tried to sexually assault her at knifepoint.

Authorities received a report of an attempted sexual assault and armed robbery on Dec. 23 around 1:15 a.m. in the 5700 block of Sycamore Canyon Boulevard.

Investigators said the victim had stopped to put gas in her car on University Avenue and the 215 Freeway near UC Riverside. As she left the gas station, she said she noticed a vehicle following her.

She drove onto the 215 Freeway and exited off the Central Avenue ramp. When she slowed down for the traffic light, she said the suspect -- traveling at freeway speed -- intentionally bumped his car into her car.

The victim pulled over to the side of the ramp, and that's when the suspect exited his vehicle. Police say the suspect, who was armed with a knife, robbed the woman and attempted to sexually assault her.

According to authorities, the victim was able to fight off the suspect, who drove away southbound on the 215 Freeway. He made off with the victim's purse and other property.

The suspect was described as a man, around 30 to 35 years old, approximately 5 feet 7 inches to 5 feet 8 inches tall, wearing a dark hooded sweatshirt with ungroomed facial hair and a skinny build.

His vehicle was described as an older model, box style, dark green, smaller SUV with a broken passenger side rear window that appeared to be covered with cardboard.

Police released a surveillance still image with an arrow pointing to the suspect's vehicle, though the photo is dark and the car is difficult to make out. 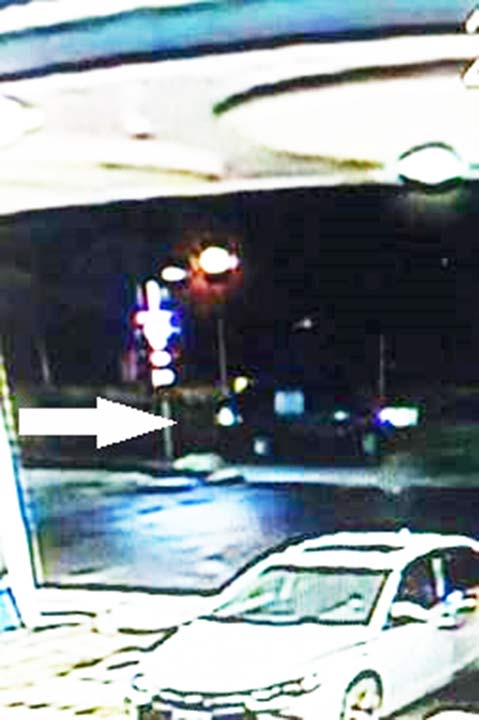 Police said female drivers who are alone, especially in the middle of the night, need to be aware of their surroundings.

"We tell anybody if this happens to you on the freeway, definitely if you're going to pull over, pull over in a well-lit area that seems to be open to the public and where you can exchange information, or if you need to call the police from there," said Officer Ryan Railsback with Riverside police.

Authorities are also investigating a possible connection to another incident that happened Thursday morning on the Blain Street off-ramp on the northbound 215 Freeway - only about a mile away from last week's incident.

Investigators said during the latest incident, the victim was not able to get a good description of the suspect because he had his high beams on her.

"In both instances, the suspect did produce a knife. In this instance, the victim was also able to kick or push him away, which caused him to leave and then she ran up the freeway to a gas station to call for help," Railsback said.

It's not clear if the two incidents stem from the same suspect. If you have any relevant information about either case, you're urged to contact Detective Karla Beler at (951) 353-7125.

Shark captured by lifeguards near Balboa Pier at Newport Beach