Man suspected of killing man, mother of his child in front of kid may be in LA, police say 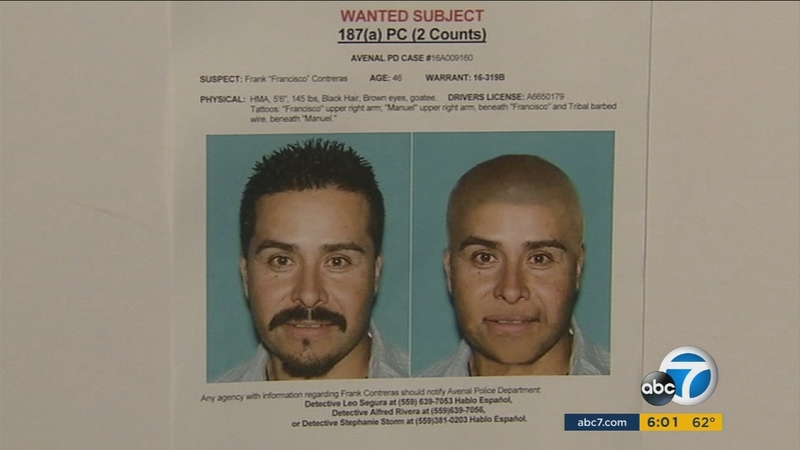 Suspect who shot man, woman in front of own child may be in LA

LOS ANGELES (KABC) -- A suspect accused of killing the mother of his son and her boyfriend in front of the little boy in the Central Valley may be in Los Angeles, authorities said.

Police Chief Russel Stivers, of the small city of Avenal, said on Wednesday that he believes that the suspect, identified as Francisco Contreras, is on the loose.

On Nov. 14, Avenal police found a man unresponsive on the front porch of a home.

"When the officers began checking for signs of life, one officer heard a children's voice state, 'He's dead because he's been shot,'" Stivers said.

The suspect also shot and killed the child's mother, who was found inside the home. Authorities said the 7-year-old boy not only witnessed the murder, but tried to prevent it.

"The child, in an effort to save his mother, grabbed the arm of the suspect, Francisco Contreras, who is his biological father. (The child) tried to prevent his mother from being shot. The suspect pushed his son to the side and proceeded to shoot his mother in the head," Stivers said.

Contreras, who also goes by Frank, was recently seen in Sun Valley, where he has family. But police said that family is cooperating with authorities.

The police are urging residents to be on the lookout as Contreras has a history of domestic violence and now has a warrant out for his arrest in the two homicides. He is considered to be armed and dangerous.

"We have a small community and it rocked our community...and so we're just trying to do everything we can to bring the suspect into custody," Stivers said.

The child has been placed in foster care, and authorities said he is doing well. They said they do not want him to spend Christmas with his mother's killer still on the run.