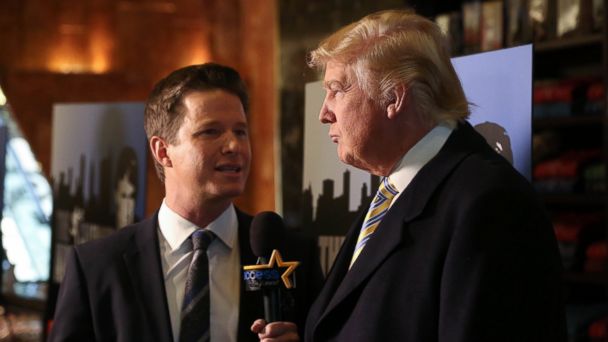 Donald Trump -- who has frequently drawn fire for his remarks about women -- was caught on tape having a foul-mouthed exchange with a television host reportedly in 2005 that his campaign dismissed as "locker room banter."

The remarks also drew swift condemnation from Republican leaders, including the Republican National Committee. "No woman should ever be described in these terms or talked about in this manner. Ever," RNC Chairman Reince Priebus said in a statement.

In the recording, obtained by The Washington Post, Trump is heard talking about how he tried to have an affair with a married woman and described how he makes moves on women.

"You know I'm automatically attracted to beautiful -- I just start kissing them. It's like a magnet. Just kiss. I don't even wait," Trump can be heard saying on the tape.

"And when you're a star they let you do it... You can do anything."

"Whatever you want," another voice is heard saying.

In the recording, Trump tells then-"Access Hollywood" host Billy Bush about how he tried to have an affair with an unidentified woman.

"I moved on her and I failed. I'll admit it," Trump said. The recording reportedly occurred several months after Trump married his third wife, Melania.

"I did try and f--- her. She was married," he said, going on to say that he took her furniture shopping and then later describing how she had changed her looks.

"Then all of a sudden I see her, she's now got the big phony t--- and everything. She's totally changed her look."

Trump put out a statement after the recording was released.

"This was locker room banter, a private conversation that took place many years ago. Bill Clinton has said far worse to me on the golf course - not even close. I apologize if anyone was offended," Trump's statement reads.

Trump's running mate, Mike Pence, refused to respond to questions at a rally Friday night. But he did say that Trump bounces back from each scandal.

"And invariably, they'll say, this time we got him. This time we found that there's another tweet come out or something. This time we got another thing, another issue that's come forward," he told the audience. "Then they turn on the next television the next morning, and Donald Trump is still standing stronger than ever before and fighting for the American people. And he is going to fight all the way to the White House."

ABC News did not immediately receive a response from NBC Universal, which owns "Access Hollywood."

In a statement to Politico, Bush apologized for the remarks.

"Obviously I'm embarrassed and ashamed. It's no excuse, but this happened eleven years ago - I was younger, less mature, and acted foolishly in playing along. I'm very sorry," Bush said, according to the site.

The remarks drew fire from lawmakers on both sides of the aisle.