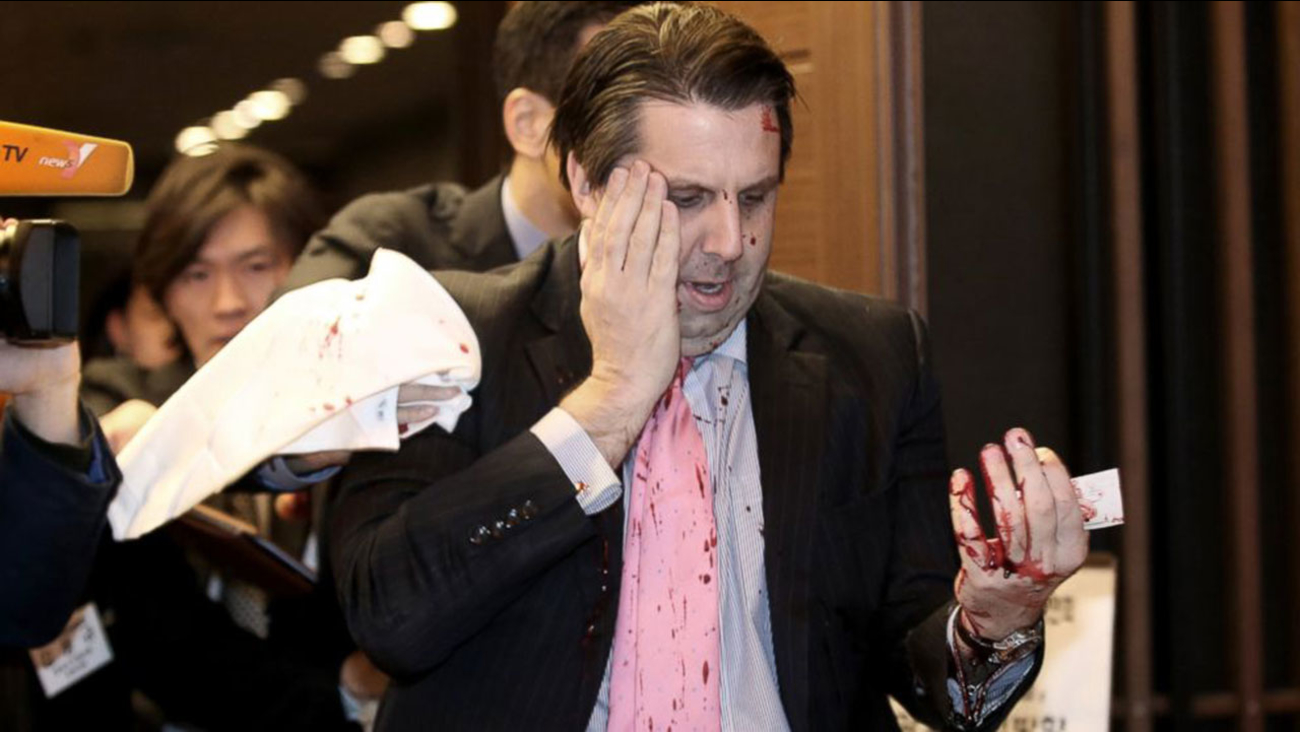 U.S. Ambassador to South Korea Mark Lippert leaves a lecture hall for a hospital in Seoul, South Korea, March 5, 2015, after being attacked by a man. (Kim Ju-sung/Yonhap/AP Photo)

SEOUL, South Korea -- U.S. Ambassador Mark Lippert was in stable condition after a man screaming demands for a unified North and South Korea slashed him on the face and wrist with a knife, South Korean police and U.S. officials said Thursday.

Media images showed a stunned-looking Lippert examining his blood-covered left hand and holding his right hand over a cut on the right side of his face, his pink tie splattered with blood.

The U.S. State Department condemned the attack, which happened at a performing arts center in downtown Seoul as the ambassador was preparing for a lecture about prospects for peace on the divided Korean Peninsula, and said Lippert's injuries weren't life threatening.

The U.S. Embassy later said Lippert was in stable condition after surgery at a Seoul hospital. Photos showed a gash on Lippert's face, starting under his right cheekbone and extending diagonally across his cheek toward his jawbone.

The attack will shock many outsiders because the United States is South Korea's closest ally, its military protector and a big trading partner and cultural influence.

But the reported comments of the suspect, 55-year-old Kim Ki-jong, during the attack - "South and North Korea should be reunified" - touch on a deep political divide in South Korea over the still-fresh legacy of the 1950-53 Korean War, which is still technically ongoing because it ended in an armistice, not a peace treaty. Some South Koreans blame the presence of 28,500 U.S. troops stationed in the South as a deterrent to the North for the continuing split of the Korean Peninsula along the world's most heavily armed border - a view North Korea's propaganda machine regularly pushes in state media.

The attack came suddenly, witnesses said. A knife-wielding man ran screaming up to Lippert as soup was being served for the breakfast meeting and began slashing, said Kim Young-man, spokesman for the group hosting the breakfast, the Korean Council for Reconciliation and Cooperation. A separate, unidentified witness told local media that as Lippert stood up for a handshake, the suspect wrestled the ambassador to the ground and slashed him with a knife.

Yonhap TV showed men in suits and ties piled on top of the attacker, who was dressed in a modern version of the traditional Korean hanbok, and Lippert later being rushed to a police car with a blood-soaked handkerchief pressed to his cheek. The suspect also shouted anti-war slogans after he was detained, police said. They said the knife was about 25 centimeters long (10 inches).

A direct attack on a senior U.S. official is unusual, but it represents a thread in South Korean society of sometimes extreme protests on both sides of the political divide. Regular small to medium-sized demonstrations, often by activists seen as professional protesters, occur across Seoul, often either by anti-U.S. liberals who support closer reconciliation with the North, or pro-government conservative groups who support the U.S. and loathe Pyongyang.

Violence sometimes breaks out at the protests. Scuffles with police and the burning of effigies of North Korean and Japanese leaders are common. Demonstrators sometimes severe their own fingers, throw bodily fluids at embassies and try to self-immolate. In 2008, hundreds of thousands took to the streets to protest U.S. beef imports after a mad cow scare in America. Both sides of the divide also protest regularly against archrival Japan, which colonized Korea in the early 20th century, over territorial and history disputes.

True to form, conservative civic groups planned to hold rallies later Thursday to condemn the attack on the ambassador.

The suspect in the attack appeared to be well-known in Seoul for his willingness to use violence to highlight his grievances.

A police official, speaking on condition of anonymity because the investigation was still happening, said the suspect in 2010 threw a piece of concrete at the Japanese ambassador in Seoul. South Korean media reported that Kim Ki-jong was later sentenced to a three-year suspended prison term over the attack. Kim, who was protesting Japan's claim to small disputed islands that are occupied by South Korea, missed the ambassador with the concrete and hit his secretary instead, the reports said.

Kim also reportedly tried to set himself on fire with gasoline while protesting in front of the presidential Blue House in October 2007. He was demanding a government investigation into an alleged 1988 rape in Kim's office, according to news reports.

South Korea's Foreign Ministry released a statement condemning the attack and vowing a thorough investigation and strengthened protection of embassies. South Korean President Park Geun-hye, who is on a Middle East tour, said in a statement that what happened was "not only a physical attack on the U.S. ambassador in South Korea but also an attack on the Korea-U.S. alliance and we will not tolerate it."

The suspect on Thursday also reportedly made mention of something that anti-U.S. protesters in Seoul have recently demonstrated against: annual U.S.-South Korean military exercises that North Korea says are preparation for an invasion. Seoul and Washington say the drills, which will run until the end of April, are defensive and routine.

North Korea each year reacts with fury to the drills, which the impoverished country is forced to respond to with drills and weapons tests of its own. In 2013 it threatened nuclear strikes on Washington and Seoul, and on the first day of this year's drills, Monday, it test-fired short range missiles in a demonstration of anger.

Lippert, 42, became ambassador in October of last year and has been a regular presence on social media and in speeches and presentations during his time in Seoul. His wife gave birth here and the couple gave their son a Korean middle name. Lippert was formerly the U.S. Assistant Secretary of Defense for Asian Affairs and a foreign policy aide to President Barack Obama when Obama was a U.S. senator.

Obama called Lippert after the attack to express his prayers for a speedy recovery, the White House said.

"We strongly condemn this act of violence," State Department spokeswoman Marie Harf said. She had no other details.