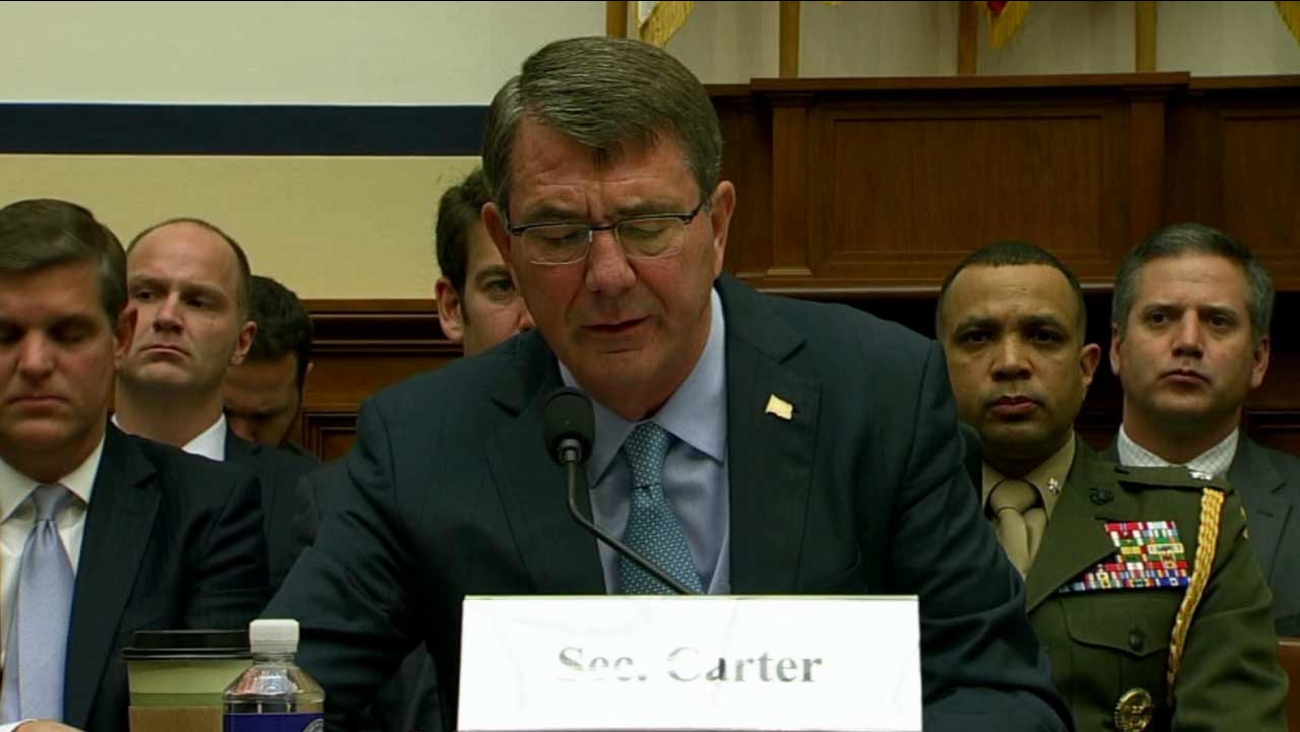 Defense Secretary Ash Carter told Congress on Tuesday, Dec. 2, 2015 that the U.S. military will deploy a new special operations force to Iraq to step up the fight against ISIS.

WASHINGTON -- For the first time in the year-plus fight against Islamic State militants, the U.S. is putting American combat troops on the ground in a more permanent role in Iraq and Syria.

Defense Secretary Ash Carter told Congress on Tuesday that the U.S. military will deploy a new special operations force to Iraq to step up the fight against IS militants, who are unleashing violence and are determined to hold territory they have seized in Iraq and Syria. President Barack Obama previously announced he was sending fewer than 50 special operations forces to Syria.

The announcement of the new special operations force to Iraq comes as Republicans have called for more U.S. boots on the ground, while war-weary Americans stand divided about the prospect of greater military involvement.

Carter said the number in the new expeditionary force will be "larger" than 50.

Meanwhile, Secretary of State John Kerry said Wednesday that NATO members stand ready to step up military efforts against the Islamic State and held out hope of broadening cooperation between the West and Russia to end Syria's protracted civil war.

After two days of meetings at NATO's headquarters in Brussels, Kerry said several alliance members were bringing more to the battle or would do soon. He didn't outline any fresh commitments specifically, saying plans would be announced only after foreign ministers first consult their governments at home.

These steps would come on top of Germany's recent approval for sending forces and materiel for a non-combat support role near the Middle East, and a British vote Wednesday that could authorize expanded airstrikes by that country against IS in Syria.

Kerry said he called on each of the other 27 members of alliance to do more to strike at the extremist group's core in Iraq and Syria and strangle its international networks. He said U.S. partners in the region, including NATO member Turkey, should receive defensive assistance.

According to a U.S. official, the new U.S. step against IS could involve up to a couple hundred troops, including the assault teams, aviation units and other support units. It would likely be based in Irbil in northern Iraq. The official spoke on condition of anonymity because the individual was not authorized to publicly discuss military planning.

Carter said the new force would focus on helping Iraq defend its borders and build its security forces, but also would be in position to conduct unilateral operations into Syria. Carter told the House Armed Services Committee that over time, the special operations force will be able to conduct raids, free hostages, gather intelligence and capture IS leaders. He said that will improve intelligence and generate more targets for attacks.

"This is an important capability because it takes advantage of what we're good at. We're good at intelligence, we're good at mobility, we're good at surprise," Carter said. "We have the long reach that no one else has. And it puts everybody on notice in Syria. You don't know at night who's going to be coming in the window. And that's the sensation that we want all of ISIL's leadership and followers to have."

Obama has set the maximum number of U.S. troops at 3,550, but it was not clear whether the president will increase that number to accommodate the new force, or whether the teams would have to be built within the current limit.

Carter, who testified alongside Gen. Joseph Dunford, chairman of the Joint Chiefs of Staff, updated lawmakers about U.S. actions in Iraq and Syria and the goal of helping local forces take the fight to IS.

They faced skeptical lawmakers who argued that the U.S. needs to be more forceful in countering the threat from IS, credited with attacks in Paris and Beirut and the downing of a Russian airliner.

Polling after the attacks in Paris and Beirut found Americans divided over sending U.S. ground troops to fight IS. A Gallup survey said 47 percent of Americans favored sending more ground troops to Iraq and Syria and 46 percent were opposed.

Republican Sen. John McCain called the move a "belated step forward" in the fight against IS. Democratic Sen. Chris Murphy expressed concern about a possible mission creep, saying the "slow buildup of U.S. combat soldiers inside Syria and Iraq risks repeating the mistake of the Iraq War - believing that extremism can be defeated by U.S. troops absent local political and military capacity."

Carter said the force might be American-only, but more likely would be mixed with Kurdish troops or others who are fighting the militants. He said the new force would conduct operations similar to two conducted earlier this year.

In October, U.S. special operations troops and Iraqi forces raided a compound in northern Iraq, freeing about 70 Iraqi prisoners who were facing execution. One U.S. service member was killed in the raid, the first American combat death in Iraq since the U.S. began its campaign against IS in August 2014. In May, a Delta Force raid in Syria killed IS financier Abu Sayyaf, yielding intelligence about the group's structure and finances. His wife, held in Iraq, has been cooperating with interrogators.

Rep. Mac Thornberry, R-Texas, the chairman of the committee, said the U.S. military effort must be bolstered and directed by the military and not "White House aides micromanaging" military operations.

"If we're going to be serious about ISIS, the president needs to assign the military a clear mission and then allow the military to carry it out," Thornberry said, using another acronym for the militant network.