Man rescued from fiery crash on Highway 395 near Helendale 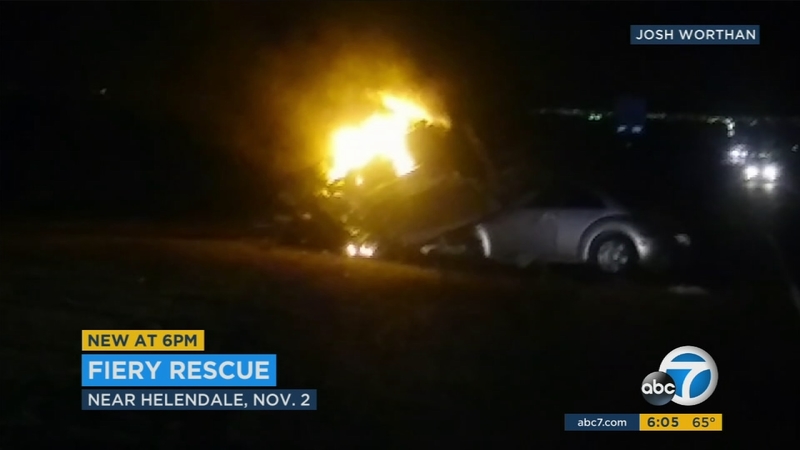 Man rescued from fiery crash on Highway 395 near Helendale

HELENDALE, Calif. (KABC) -- A fiery crash along Highway 395 near Helendale left one driver trapped in his vehicle, but first responders were able to rescue the man -- and it was all caught on video.

According to California Highway Patrol, a Hyundai slammed head-on into a Volkswagen on the other side of the road while attempting to pass slower traffic.

The two people in the Hyundai were killed, but the driver of the Volkswagen survived and was left unable to escape.

"Dude, they're dying in that car! I can't watch that dude die," a bystander was heard saying in the video.

"One of the bystanders had run up to me and handed me a fire extinguisher, and I just did my job, you know the guy was trapped," CHP officer Aaron Warnke said.

The only door the victim could get out through was blocked by flames, which led one officer to use his own squad unit to push the Volkswagen away.

"The only thing on my mind was to save this person from the fire," CHP officer Sergio Mendez added.

The San Bernardino County Fire Department arrived on scene to finish the rescue.

"As unfortunate as it was that we lost the two lives in the other vehicle, the fact that we were able to save the man from the other vehicle is tremendous and definitely goes back to what we're here to do," said Andrew Banninger of the San Bernardino County Fire Department.
Related topics:
helendale/silver lakessan bernardino countycar crashrescuefire departmentscarcar fire
Copyright © 2021 KABC-TV. All Rights Reserved.
TOP STORIES
1 person wounded in Beverly Hills shooting
Dodgers beat Atlanta, narrow NLCS gap to 2-1
LA City Council to consider suspending Ridley-Thomas
As NBA season opens, Staples enforcing strict COVID protocols
Man tried to get Hemet officer's gun during rough arrest: police
SF In-N-Out shut down after defying COVID vaccine mandate
Curry, Warriors stun James, Lakers 121-114 in opener
Show More
Ex-Olympic boxing champ pleads no contest for molesting 2 girls
All counties in California now under drought emergency declaration
Mobile home residents fed up with Dominguez Channel smell
2 men dead after fire at Canoga Park marijuana grow operation
LGBTQ+ pioneers among those featured at ONE Archives at USC
More TOP STORIES News