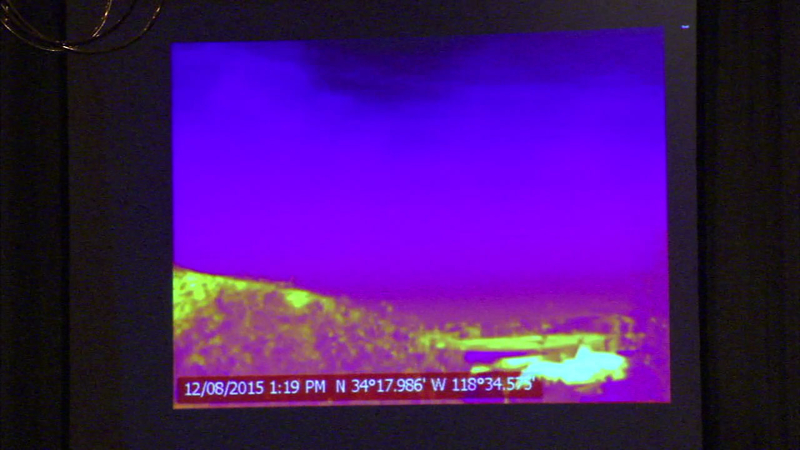 PORTER RANCH, LOS ANGELES (KABC) -- It's invisible to the naked eye, but experts say video shot with an infrared camera on Tuesday shows a toxic gas plume releasing from the side of a mountain in Porter Ranch.

"This camera shows profound contamination in the evening and in the daytime in the Porter Ranch area that people aren't aware that it's there, but it's really, really bad," said Dr. Paul Rosenfeld, an environmental scientist.

Residents say they've been harmed by the leak at the Southern California Gas Company's facility that began in October. They say they've suffered headaches, nausea and nosebleeds.

"It's like if you have turned on the stove and left it all day. When you walk outside, you are hit with that gas smell," said Paige Hemmis.

As a co-host of the former ABC series "Extreme Makeover Home Edition," Hemmis helped build homes for people in need across the country. Now she fears her own home is not safe.

Her dog Juneau has been seriously ill, with lesions on her mouth and face. Doctors can't figure out what's wrong.

"They said it could be the gas exposure. We just don't know," Hemmis said.

Officials with the Southern California Gas Company plan to meet with residents on Wednesday about the Aliso Canyon gas leak.

Robert F. Kennedy Jr. is on the team of attorneys preparing to take legal action against the gas company on behalf of residents. The company says it could take months to repair the leak.

More than 2,000 residents have asked to be relocated.