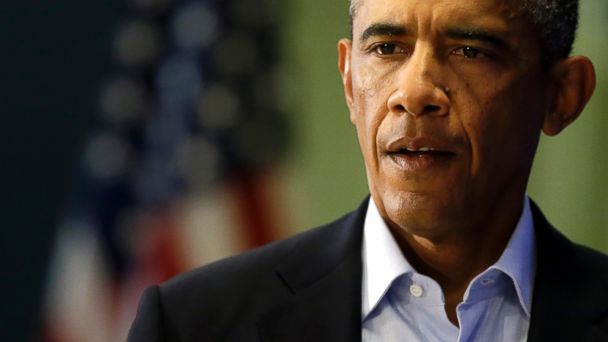 "No just God would stand for what they did yesterday or every single day," the president said during a news conference in Martha's Vineyard. "People like this ultimately fail. They fail because the future's won by those who build and not destroy. The world is shaped by people like Jim Foley."

US Mother's Heartbreaking Message on Terrorist Slaying of Son

According to one senior U.S. official, ISIS had warned the U.S. that they planned to kill Foley to avenge airstrikes against ISIS targets in Iraq. Prior to his execution, U.S. officials say, they used Turkish, Russian and Czech intermediaries to advocate for his release.

"A group like ISIL has no place in the 21st century," Obama said today, using the acronym by which the militant group is also known. "They have rampaged across cities and villages killing innocent, unarmed civilians in cowardly acts of violence. They abduct women and children and subject them to torture and rape and slavery ... ISIL has no ideology of any value to human beings."

"We are all heartbroken," Obama says he told Foley's parents this morning.

John and Diane Foley eulogized their son during a news conference this afternoon.

"He was a courageous, fearless journalist," Diane Foley said. "Jimmy had a big heart. ... That's what we shared with President Obama."

"We just pray that Jim's death can bring our country together in a stronger way in the values that Jim holds dear," Diane Foley said, before correcting herself to "held dear."

"We beg compassion and mercy" for the other journalists held by ISIS, John Foley said. "There's no reason for this slaughter."

"Any attempt by you, Obama, to deny the Muslims their right to live in safety under the Islamic caliphate will result in the bloodshed of your people," he says.

Foley, clad in an orange jumpsuit, kneels next to the militant, who is clutching a knife.

"I wish I had more time. I wish I could have the hope of freedom of seeing my family once again, but that ship has sailed," Foley says before his on-camera execution.

After the gruesome beheading of Foley, the ISIS militant threatens the life of another American hostage -- Steven Sotloff, who went missing in August.

Though he did not mention Sotloff specifically, Obama today promised that, "the United States of America will continue to do what they must do to protect our people."

"We will be vigilant. We will be relentless," he added.

British officials say it is "apparent" that the ISIS militant in the video was from the United Kingdom and tell reporters they're working to identify the individual.

"Let's be clear what that act is: it is an act of murder. And murder without any act of justification," Cameron said.

"We know far too many British citizens have traveled to Iraq and traveled to Syria to take part in extremism and violence. And what we must do is to redouble all our efforts is to stop people," Cameron said at a news conference today.