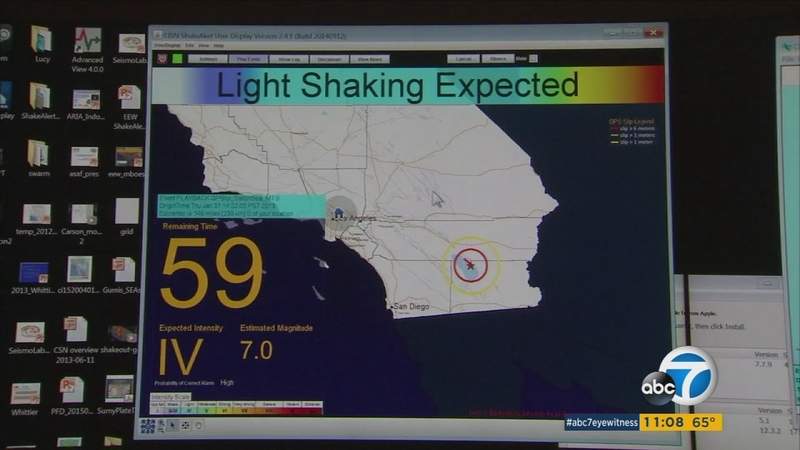 PASADENA, Calif. (KABC) -- A $3.6 million grant was awarded to scientists working to advance an earthquake early-warning system that could save hundreds if not thousands of lives on the West Coast.

An early-warning system could come in the form of a message on your cellphone that buys you from a few seconds to a few minutes to brace yourself for the shaking or find shelter.

"A system like this tells you not only that an earthquake is coming but it tells you what's going to happen when it gets there," said Tom Heaton with Cal Tech.

The current system may not have prevented the dozens of deaths in the devastating 6.4-magnitude Taiwan earthquake, because it struck in the middle of the night. People were sleeping and their 17-story building collapsed.

The new West Coast system could provide enough warning prior to shaking to slow down trains, halt elevators, opening their doors and even alert schools and doctors in surgery.

"I think it will save lives. The most obvious place to save lives is in transportation," Heaton said.

"I think every second counts when it comes to a disaster. You never know if it's going to be that 30 seconds that saves your life or your loved ones," said Dani Williams-Jones, a Pasadena resident.

The early-warning system is just a prototype now, but seismologists say it works.

BART operators are already testing it and with the new grant, scientists will be able to advance the system.

Still, much more funding is needed, including some $38 million to implement the system for California, Oregon and Washington and another $16 million a year for operation and maintenance.

"I think that it's a question of technology. We should have it as soon as we could get it," said John Casani, another Pasadena resident.