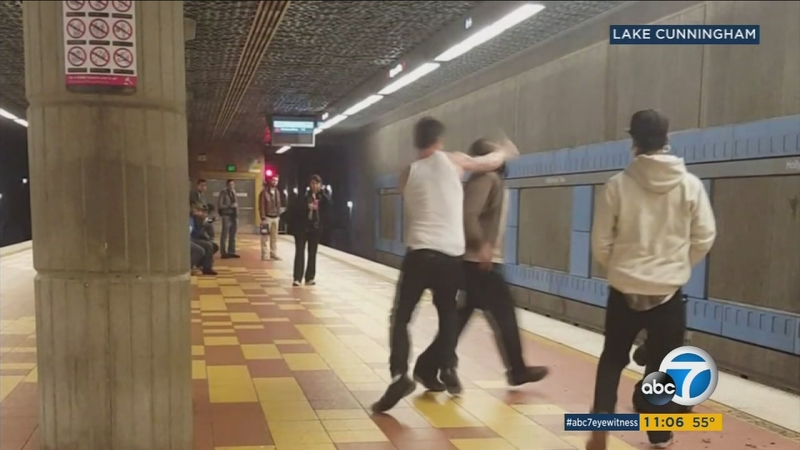 HOLLYWOOD, LOS ANGELES (KABC) -- A violent encounter at a Metro station in Hollywood was captured on video by a witness and authorities said the recording was playing a huge role in their investigation.

The video, taken at the Metro station on Hollywood and Vine at about 12:45 a.m. on Tuesday, shows a suspect viciously attack a man, punching him in the head and knocking him to the ground.

Lake Cunningham was at the Metro station and decided to start recording the encounter with his cellphone.

"I knew right away that something was about to happen so I took my cellphone out and started recording video," Cunningham said.

Cunningham said the punch was not the only time the victim was struck.

"You can't see on the video, but he kicks him in the mouth when he's on the ground and was dangerously close to the train tracks right there and if he was a foot off he could've fallen on the tracks," Cunningham explained. "Who knows what happens once you're on the tracks."

Cunningham said he tried to get help the victim who left the area.

"When I approached the victim, he was covering his mouth, he was covered in blood and he told me it was OK. I told him, 'No, it's not OK. This is not OK at all,'" Cunningham recalled.

Investigators with the Los Angeles County Sheriff's Department said they received several leads on the aggressor and were able to locate the victim.

"Deputies are speaking to him now. He was taken to the hospital as a precautionary measure," Det. Roger Ballesteros with the Los Angeles County Sheriff's Department stated.

While many on social media may comment that witnesses recording an attack should try to intervene, police said the best thing people can do in a situations like this is to be a good witness.

"Certainly video helps, but obviously calling the police is priority No. 1," Ballesteros said.

"I'm hoping that people will learn from this and be more vigilant because everyone in Hollywood, in L.A., all over the place, they see crazy stuff like this happen every single day and just ignore it and don't do anything about it," Cunningham said.