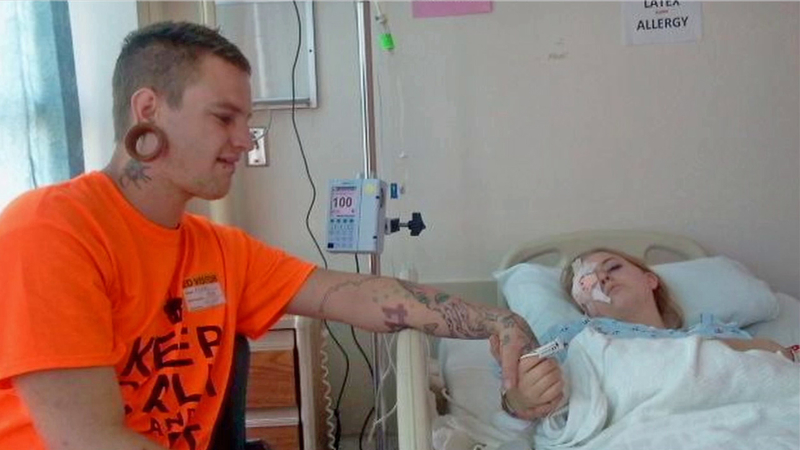 VIDEO: Family of girl shot in eye speaks out

STEVENSON RANCH, Calif. (KABC) -- A 22-year-old woman was shot in the eye, possibly by a BB gun, in what authorities are calling an apparent act of road rage. The suspect has not been found.

Blake Hipp clutched his girlfriend's hand Sunday as she waited to go into surgery in hopes of saving her sight.

"I heard a big pop right away instantly I thought it was a gunshot, and she actually thought a broken bottle hit her in the face," he said.

Hipp's girlfriend, who only wanted to be identified as Megan, was shot Saturday just after 10:30 p.m. in Stevenson Ranch. The couple was leaving Walmart when Hipp says a suspect in an orange Kia Soul suddenly tried to ram their car.

They swerved out of the way, only to encounter the armed driver moments later.

"He slows down to about 15 miles so he can get us next to him and he shoots right away," said Hipp.

Megan was hit in the right eye, which is her good eye. The 22-year-old photographer has had impaired vision in her left eye since she was a child.

"She's having a tough time because she might not have her vision and that's a huge loss," said Megan's sister, Katie McGinely.

At this point, doctors don't know if it's a BB or a bullet, only that it punctured her eye.

Family members said the suspect was caught on the store's surveillance cameras. Detectives are working on getting that video as they try to track down this dangerous suspect.

"I just really want him caught so that he's not walking just around and shooting random people. She deserves for him to be found," McGinely said.

Megan underwent seven hours of surgery at Harbor-UCLA Medical Center. According to the family, Sunday's surgery was successful in saving Megan's eye, however doctors are doubtful her vision will remain.

The suspect was captured in Walmart's surveillance footage entering and exiting the store and getting in his vehicle. Family members also say the suspect did not encounter Megan or her boyfriend inside the store. The suspect allegedly walked out of the store 30 minutes before Megan. He sat in his car and allegedly began driving when Megan and her boyfriend got into their car.

The investigation is ongoing. Anyone with information is urged to contact the Los Angeles County Sheriff's Santa Clarita Station at (661) 255-1121.