"We won," Tom Brady said, "but we know it was far from perfect."
AP
By FRED GOODALL AP Sports Writer 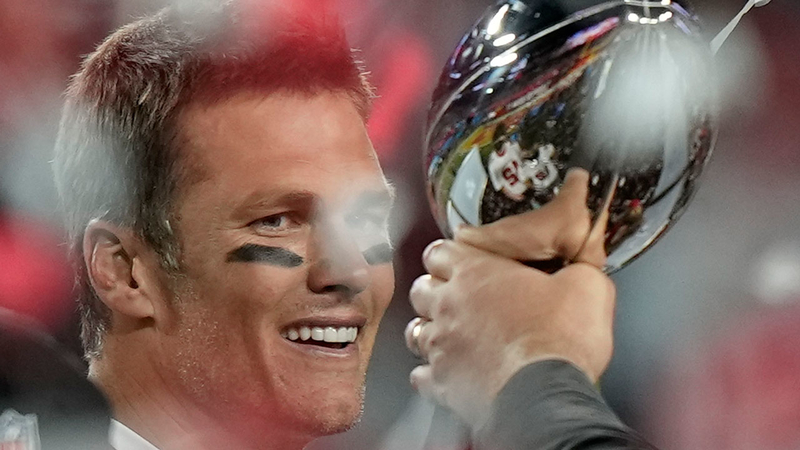 Down one point with 1:24 to go in the kickoff to the NFL season, the defending Super Bowl champions were confident their 44-year-old quarterback would find a way to win again Thursday night. 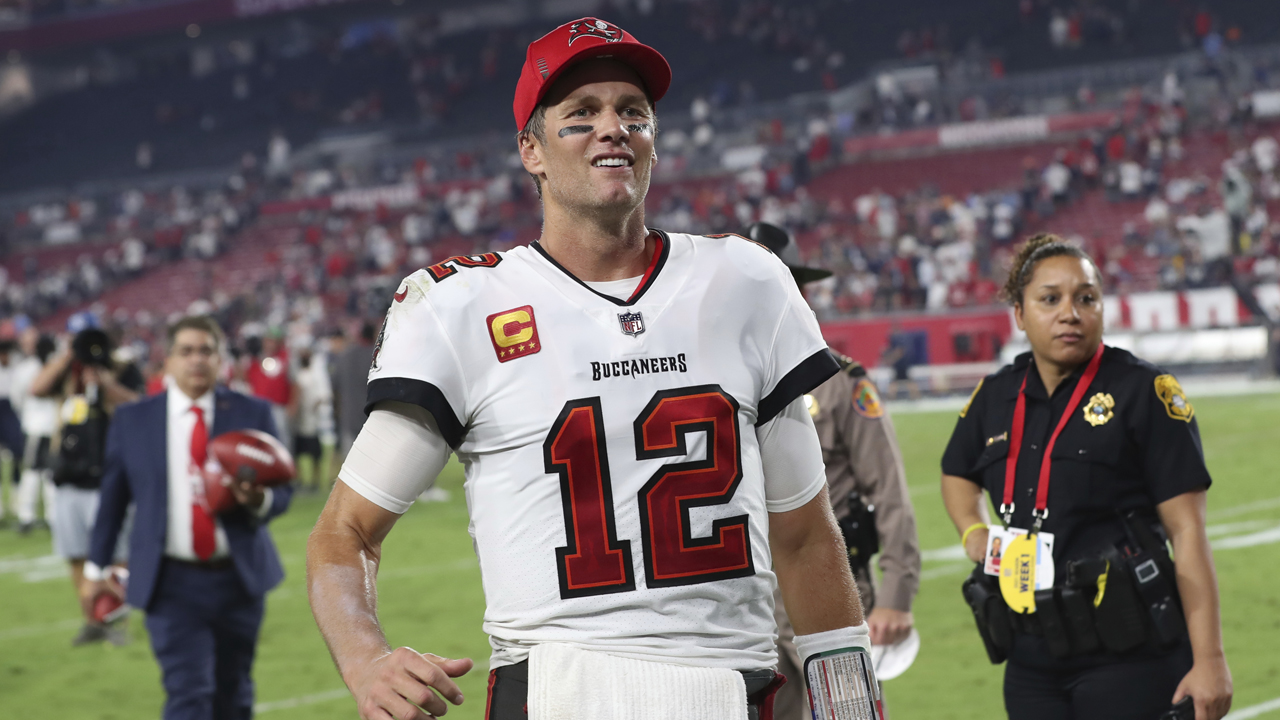 Tampa Bay Buccaneers quarterback Tom Brady (12) leaves the field after a game against the Dallas Cowboys during an NFL football game Friday, Sept. 10, 2021, in Tampa, Fla.

It's simply what Brady, who threw for 379 yards and four touchdowns in a 31-29 win over the Dallas Cowboys, does.

"There was no doubt that we're going to win the game with him," coach Bruce Arians said. "It's just who's going to make plays."

Things you love to see: pic.twitter.com/xrOAbVdh7X

With seats in a NFL stadium filled to full capacity for the first time since the start of the coronavirus pandemic, Ryan Succop won it with a 36-yard field goal with 2 seconds remaining. Brady set it up with a last-minute drive directed on the same field where the Bucs became the first team to play and win a Super Bowl in its home stadium seven months ago.

It was the 49th game-winning the three-time NFL MVP has led in the fourth-quarter or overtime during regular season. That's third on the all-time list behind Peyton Manning (54) and Drew Brees (53), who are both retired.

"There's obviously a lot to clean up," Brady said after completing 32 of 50 passes with two interceptions.

The Bucs, hoping to become the first team to repeat as champions since Brady led the 2003 and 2004 New England Patriots to consecutive titles, turned the ball over four times.

"We won," the quarterback said, "but we know it was far from perfect."

"It's just competition at its best."

For Brady, a seven-time champion, it was the 300th regular-season start in a sparkling 22-year career - a record for a quarterback. The 44-year-old also joined Drew Brees as the only players to throw for 300-plus yards in a game 100 times.

Chris Godwin, Rob Gronkowski and Antonio Brown caught first-half touchdown passes, and the Bucs (1-0) extended their winning streak to nine games dating to last December. Brady's second TD pass of the night to Gronkowski put the defending champs up 28-19. Succop's field goal came after Greg Zuerlein put the Cowboys ahead with a 48-yarder with 1:24 to go.

"As I told our guys, I learned a long time ago we don't learn anything more from losing than you do from almost losing, We've got a lot to learn," Bucs coach Bruce Arians said. "Obviously not pleased with the start of the game, Loved the finish. Our guys are winners, They're going to finish."

Dak Prescott threw for 403 yards and three TDs for Dallas in his first game since suffering a severe injury ankle that ended his 2020 season after just five games. The sixth-year pro didn't play in the preseason after straining his right shoulder early in training camp, and limitations on his throwing weren't lifted until about two weeks before the opener.

"I thought Dak played well," Cowboys coach Mike McCarthy said. "I really like the way our team played, the preparation coming into it. ... We had tough looks, particularly some of the things they did defensively. I thought our guys did a good job adjusting, did a good job distributing the ball on the perimeter."

The Cowboys have never beaten Brady, who improved to 6-0 against them, with five of the victories coming during his historic 20-year run with the New England Patriots.

But Prescott, with help from a revamped Dallas defense that forced a fumble and intercepted a pass that glanced off Leonard Fournette's hands to set up a touchdown and field goal, pushed the defending champs to the limit before a mostly mask-less crowd of 65,566.

Ultimately, though, Brady made the Cowboys pay for kicking woes that contributed to Dallas only scoring 16 points in the opening half. In addition to missing a 31-yard field goal, Zuerlein had an extra point clank off the left upright in the second quarter.

Seven of the Cowboys' first eight possessions either started or ended in Tampa Bay territory, yet Prescott still faced a nine-point deficit before Dallas pulled within 28-26 on Amari Cooper's 21-yard scoring reception with less than a minute remaining in the third quarter.

Cooper finished with 13 catches for 139 yards, including a 5-yard TD catch in the second quarter. CeeDee Lamb had a 22-yard scoring reception for the Cowboys, who finished 6-10 with Prescott missing the final 11 games of last season.

Brady was intercepted twice, once on a desperation pass at the end of the first half. Ronald Jones and Chris Godwin also lost fumbles, with the latter's mistake preventing the Bucs from putting away the game in the closing minutes.

Brown had five receptions for 121 yards, including a 43-yard TD before halftime. Godwin had nine catches for 105 yards, but fumbled at the Cowboys 1 to stop a potential clinching drive before Prescott drove Dallas to Zuerlein's go-ahead field goal.

The #DallasCowboys have the lead! #Kickoff2021

Due to attendance restrictions imposed because of the pandemic, the largest crowd for any NFL game last season was 24,845 for the Super Bowl played at Raymond James Stadium in February.

Fans arrived early Thursday night for a brief pregame ceremony celebrating Tampa Bay's second championship - first in nearly two decades. They roared when co-owner Bryan Glazer stepped to the microphone and reminded them that the Bucs are the only franchise that's claimed a crown on its home turf.

"There was one thing missing," Glazer said. "All of you."

Earlier, the teams stood on their respective goal lines for the playing of Alicia Keys' version of "Lift Every Voice and Sing," the national Black anthem.

The video featured in the player above is from a previous story.
Report a correction or typo
Related topics:
sportsfloridanfltom bradyu.s. & worlddallas cowboystampa bay buccaneers
Copyright © 2021 by The Associated Press. All Rights Reserved.
TOM BRADY
NFL Quarterback Council 2021: Ranking the top 10 QBs in arm strengt...
Las Vegas Raiders QB Derek Carr dreams of catching Tom Brady by pla...
2021 NFL offseason: Everything you missed, including the Aaron Rodg...
The NFL's most vulnerable spots: 16 teams that have depth issues be...
TOP STORIES
Search resumes for Brian Laundrie in Gabby Petito case
Heat advisories issued for most of SoCal on first day of fall
California struggles to conserve water amid historic drought
Growing scam targets Bank of America and Zelle customers
Woman safe after video of possible abduction in Bell Gardens
FDA expected to authorize limited wider use of Pfizer booster
Who is running for mayor of LA? Here are the top contenders
Show More
Anti-Black bias events most prevalent in 2020: CA attorney general
Suspects in Kristin Smart disappearance could face trial
Willie Garson, known for 'Sex and the City,' dies at 57
Mega Millions ticket worth $432 million sold in New York
Officials: Many Haitian migrants are being released in US
More TOP STORIES News