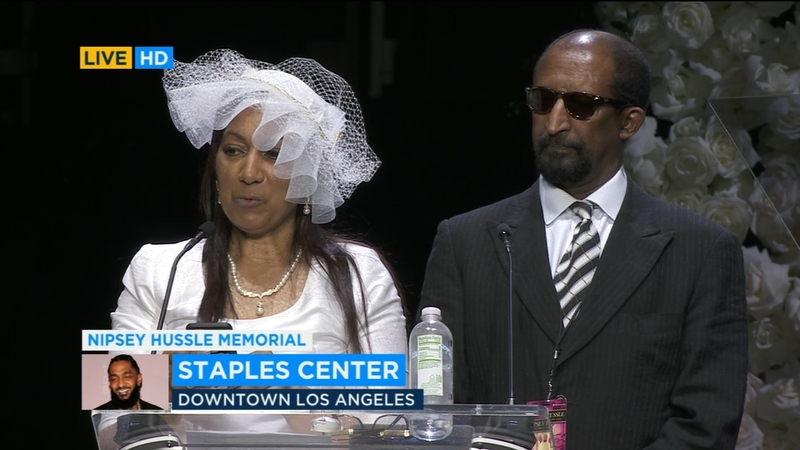 LOS ANGELES (KABC) -- The parents of Nipsey Hussle remembered him as a fighter, a "great man" who also was always concerned about the well-being of others.

At the memorial service for the slain rapper, family, friends and musicians praised Hussle for how he cared about his local community and family.

Hussle was born Ermias Joseph Asghedom. He grew up in Los Angeles, in the Crenshaw neighborhood.

His father, Dawit Asghedom, recalled the day Ermias was born.

"I saw him struggling because his umbilical cord was around his neck," Dawit said. "We thought we were gonna lose him. But he made it."

Later on, Ermias had to undergo surgery. His father recalled that his son was not worried about his own health, but just wanted to reassure his parents.

"I was next to him in his bed. He looked at me and, instead of worrying about his pain, he looked at me and he said 'I love you Daddy,' just to assure me he was OK. That again was when I felt how strong he is."

The rapper's mother, Angelique Smith, said her son was always trying to reassure her that he was doing well.

But she says in the months before his death she sensed something bad was going to happen in the family.

She thinks he may have sensed it too. In the past, he wasn't always diligent about returning her texts or calls when he was busy, she said. But in recent months, he had been far more attentive.

"All of a sudden Ermias started texting me, 'Hey Mom. I love you. I'm just sending you some positive energy for your day. I hope that you have a beautiful day.'"

"I felt spiritually in my soul as if Ermias was going to leave. We had closure conversations through text messaging with one another.

"I think Ermias knew too. Because Ermias was doing things differently."

He visited his grandmother every day, she said.

The Saturday before he was killed, she said she told him: "I said my heart feels as if there's possibly heaviness in your heart and soul."

"He said I'm grateful. I have a studio again. I'm just happy and ready to work."

"I'm very proud of my son. My son Ermias Joseph Asghedom was a great man."