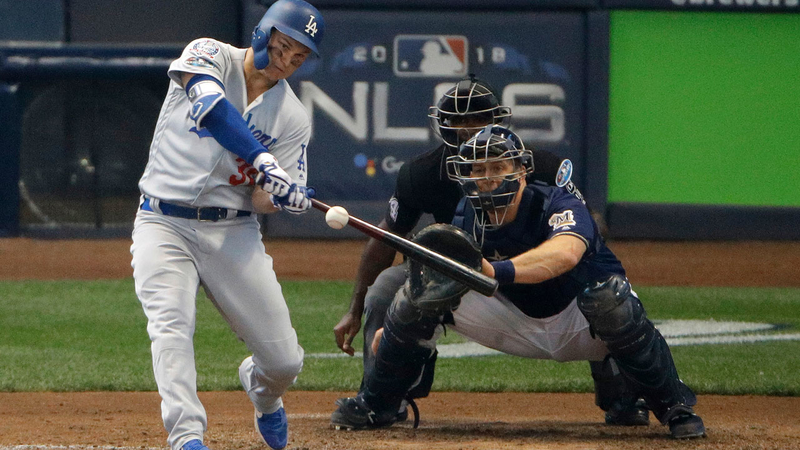 MILWAUKEE (KABC) -- Justin Turner and the Los Angeles Dodgers know all about performing in the postseason.

Shut down for most of the afternoon, Los Angeles staged another late rally and Turner hit a two-run homer in the eighth inning to send the Dodgers over the Milwaukee Brewers 4-3 and even the NL Championship Series at a game apiece.

The high-powered Dodgers had two measly singles off starter Wade Miley before breaking through against a vaunted bullpen. After forcing the Brewers to use six relievers in Milwaukee's 6-5 victory Friday night, the NL West champions put that extended look to good use in Game 2, especially against faltering All-Star Jeremy Jeffress.

"As long as we have outs left, we know we're in the game," Turner said.

Milwaukee wasted a terrific performance by Miley in its first loss in three weeks, ending a 12-game winning streak that produced free burgers for its fans as part of a promotion by a local restaurant chain. Miley pitched 5 2/3 scoreless innings in his second career playoff start and had two hits in his first multihit game since 2014.

"We were in really good shape with the effort that Wade gave us," Brewers manager Craig Counsell said. "He pitched beautifully."

The best-of-seven series now moves to Dodger Stadium for Game 3 on Monday night. Walker Buehler pitches for Los Angeles and Jhoulys Chacin gets the ball for Milwaukee.

Miley handed a 2-0 lead over to his bullpen and Travis Shaw tacked on a solo drive in the sixth, delighting a yellow towel-waving crowd of 43,905 at Miller Park. But that was the last run for the Brewers, and the Dodgers finished off their rally this time around after nearly taking Game 1.

Cody Bellinger got Los Angeles on the board with an RBI single in the seventh, chasing Corbin Burnes and stopping an 0-for-15 slide in the playoffs that landed him on the bench at the start of the game. Austin Barnes forced in another run with a bases-loaded walk off Jeffress, but the right-hander escaped when pinch-hitter Yasmani Grandal bounced into a double play.

The Dodgers went right back to work in the eighth. Chris Taylor reached on a leadoff single before Turner hit a long drive to left off Jeffress, admiring the ball with his bat pointed toward the sky for a short time before rounding the bases.

Jeffress also struggled in Game 1, allowing two hits while only recording one out. He was charged with two runs and six hits in 3 1/3 innings in three appearances in the Division Series against Colorado, including a blown save in the opener.

Los Angeles has scored eight runs against Milwaukee's bullpen, all in the seventh inning or later.

"The more you face the relievers, the easier it's going to get," Bellinger said.

It was Turner's seventh career playoff homer. He was co-MVP of the NLCS last year with Taylor when Los Angeles made it to the World Series for the first time since 1988.