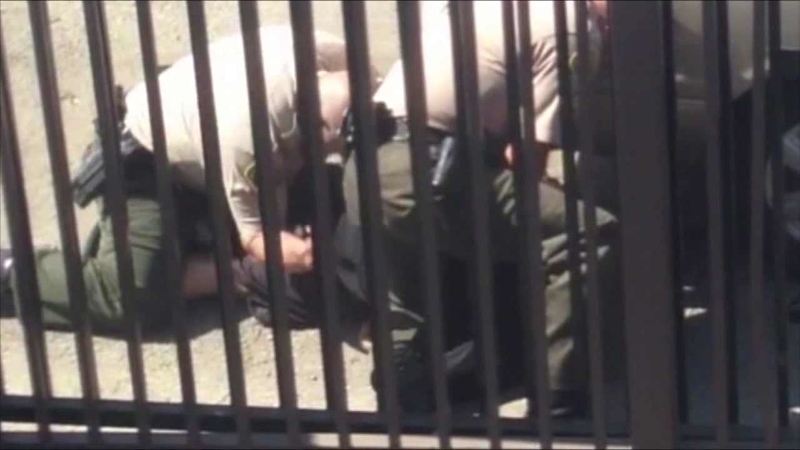 MONTEBELLO, Calif. (KABC) -- The family of a man killed in a deputy-involved shooting demanded a new investigation on Friday, as video of the Long Beach shooting surfaced.

A recording of what would become a deadly take down of Long Beach man Noel Aguilar, 23, by two deputies is the centerpiece of a legal challenge by Aguilar's family.

"He was a person with such a nice heart. He would always help people," said Mary Herrera, Aguilar's fiancee.

The family's attorney, Humberto Guizar, said the shooting was a murder, and they are asking for justice.

Guizar said the video was never given to the Los Angeles County District Attorney's Office.

The DA had concluded that lethal force was reasonable given what the deputies knew at the time, May 26, 2014, near the Long Beach and Compton border.

Guizar turned over the recording to both the DA and the FBI and said he wants the case reopened and the two deputies, Jose Ruiz and Albert Murad, criminally prosecuted.

According to the DA's report, a deputy wrestled away a gun Aguilar had in his waist band, however, there was confusion and miscommunication - Deputy Ruiz fired at Aguilar but instead hit his partner.

Moments later, the other deputy fired three more shots, striking Aguilar's back, confirmed by the autopsy.

Guizar points out that when the shots were fired, Aguilar's hands were visible, reaching out above his head as he was struggling on the ground.

"You don't shoot a person with their hands in front of them if you don't see a gun in their hand," Guizar said.

The DA's investigation, which included a similar cell phone recording, found that Aguilar had been under the influence of methamphetamines and continued to struggle even after he was shot.

As for the video, a spokesperson from the DA's office said that when new evidence arises in the case, prosecutors will review it.

Both the wounded deputy and his partner were back on duty.