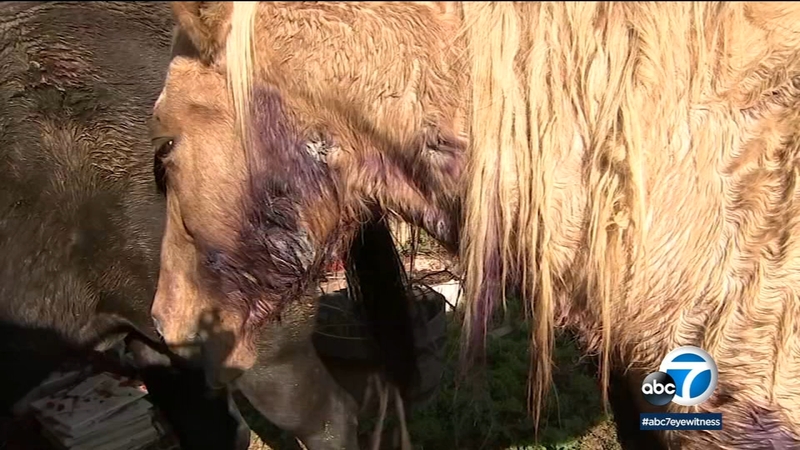 NORCO, Calif. (KABC) -- Norco residents are on edge after reports of a possible mountain lion attack.

Joey Barron said one of his horses was attacked twice and another was killed six months ago. He said the California Department of Fish and Wildlife isn't doing enough.

Barron's horse Sugar was treated by a local vet after a vicious attack Thursday by what the owners believe was a mountain lion.

Barron's wife discovered Sugar was injured and he said this is the second time it's happened in just two weeks.

"We found paw prints the last time...in yesterday's attack we found a paw print over by the chicken coop," Barron said.

It comes six months after the family's mini horse was killed in an attack.

"It's unnerving. If the kids were home, it could have been a lot worse," he said.

Barron has reported each attack to California Fish and Wildlife, but is getting frustrated with how little is being done.

The department said it can't confirm if it was in fact a mountain lion. In the first attack, evidence suggested it was, so they offered a depredation permit to allow Barron to kill the animal if it returned.

In the two attacks on Sugar, experts couldn't make a clear determination when comparing prints. They said it could have been a coyote, bobcat or a dog.

Barron has three large dogs, but said they get along with the horses and in two of the attacks, the dogs were inside. Whatever animal it is, he just wants to make sure his neighborhood is aware.

"I'd just like it to be out there so people realize it's not just a mountain lion attack...it's three. They're getting bolder as time has gone on. They're coming in the middle of the day," Barron said.