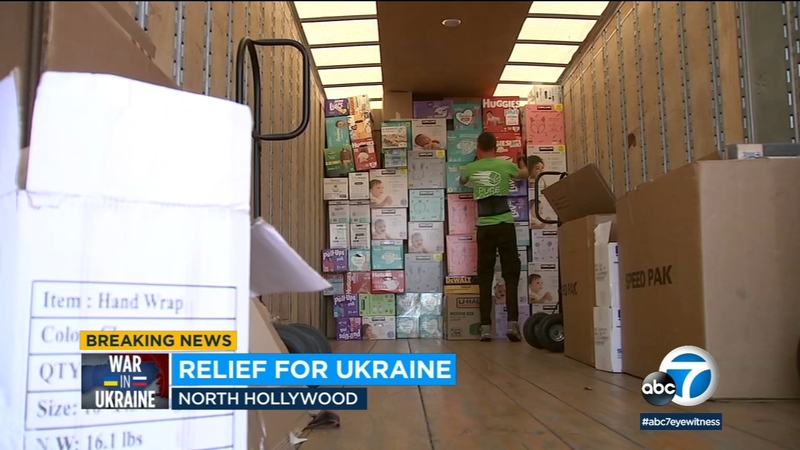 NORTH HOLLYWOOD, Calif. (KABC) -- A donation drive got underway Thursday at a San Fernando Valley church for the victims of the war in Ukraine.

Things like medical supplies, tents, baby care items, blankets and non-perishable foods to be shipped overseas, are being collected at Awaken L.A. Church in North Hollywood, and three other Southern California locations.

They're hoping to collect around 10 tons of supplies that will be flown to Poland and then transported to Ukraine.

Many of the volunteers have relatives in Ukrainian cities, and they are very frightened by the ongoing attacks.

"When I hear about the infants in the hospital, what happened, you know, when kids in the shelters, you know, in the subways and everywhere, it's terrible," said Marina Malko, co-pastor at Awaken L.A. Church. "It's women, it's kids, it's infants, and it's human beings, it's very hard."

Donations can be dropped off at Awaken L.A. Church until Sunday, March 6.

Hundreds of thousands of Ukrainians are displaced due to the ongoing battle with Russia, this after Russia began its attack on Ukraine in the early morning of Feb. 24.

Now, many around the world are left wondering how to help Ukrainians amid the onslaught.