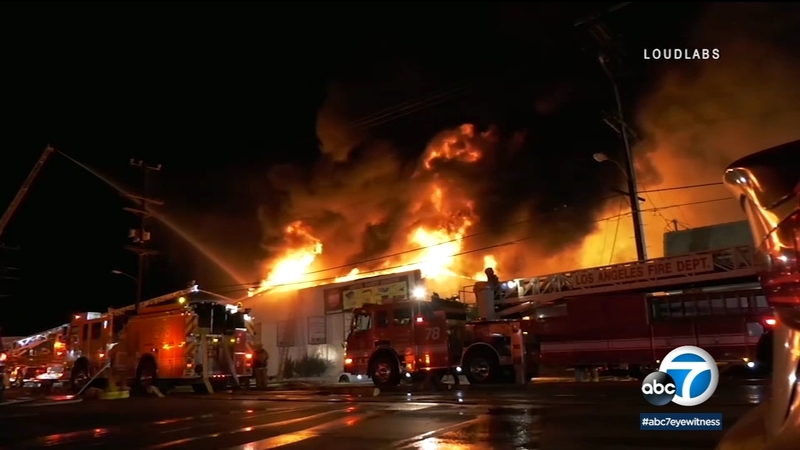 NORTH HOLLYWOOD, LOS ANGELES (KABC) -- Flames consumed three North Hollywood businesses overnight after a structure fire broke out and smoldered for several hours before crews got them under control.

The blaze erupted early Saturday morning at an auto body shop along the 6800 block of North Lankershim Boulevard north of Vanowen Street, according to the Los Angeles Fire Department. The charred structures also housed a movie set design studio and an art supply and packaging warehouse, all with highly flammable material inside.

The inferno continued to burn more than eight hours after it ignited as fire crews stamped out hot spots well into Saturday afternoon.

"We are doing an extensive overhaul operation that involves tractors to peel off later by layer of the structural collapse of the roof to access still burning pockets below there," said LAFD's Battalion Chief Tyler Dixon.

The L.A. Department of Water and Power was also on scene after the fire also knocked out power to several other structures in the area.

A former employee of the packaging business that went up in flames said she was keeping the owner in Miami updated on the damage.

"It's a big loss because it was a big warehouse. They just got a few containers from supplies last week. It's a big loss right now," said Patricia Birdtail.

No injuries were reported and the cause of the fire was still under investigation.
Report a correction or typo
Related topics:
north hollywoodlos angeleslos angeles countybusinessfiredestroyed businesses
Copyright © 2021 KABC-TV. All Rights Reserved.
More Videos
From CNN Newsource affiliates
TOP STORIES